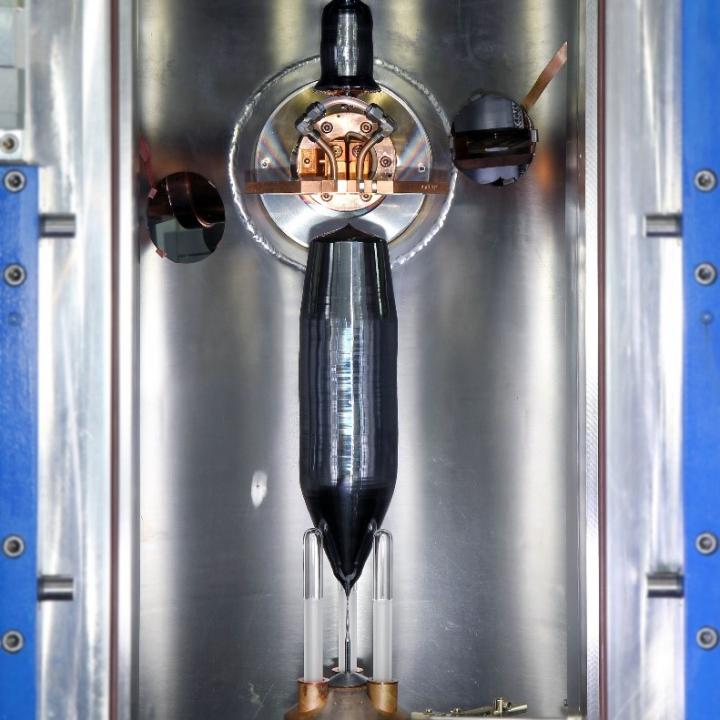 Prototype of a silicon-28 single crystal after growth in a floating zone plant in the context of the KILOGRAM project. Credit: IKZ

The new International System of Units (SI) was adopted at the 26th General Conference on Weights and Measures in Paris on 16 November 2018. Now the system officially came into force on 20 May 2019, the World Metrology Day. From now on, 7 natural constants form the foundation of all measures.

Hereafter, a new definition for the kilogram is valid using the Planck constant and thus this unit is no longer determined through the mass of the „original kilogram”. The scientific and high-technology communities mostly benefit from this.

The IKZ played a decisive role in replacing the almost 130-year-old artificial object of the original kilogram, because the structurally perfect crystals of isotopically-pure silicon-28 (Si-28, enrichment up to 99.9995 %) grown at the IKZ were of decisive importance for this project.

In these crystals, almost all the atoms have the same mass and are arranged in a regular three-dimensional lattice, which makes a very exact assignment possible between the mass of the crystal and the number of its atoms.

In the new SI system, the value of the Avogadro constant is determined and one mole therefore contains exactly 6.02214076×10 to the power of 23 individual particles.

But that is not everything. Now all 7 basic units are defined by natural constants. This has been the case for many years for the second (with the hyperfine structure transition of the ground state in the Cs atom), the metre (via the speed of light) and the candela (via the photometric radiation equivalent of a special radiation).

Within the framework of the “KILOGRAM” projects led by the Physikalisch-Technische Bundesanstalt (PTB) in Braunschweig, several very precise spheres with shape deviations of less than 20 nm at a diameter of about 94 mm and with a defect-free polished surface were prepared from the silicon-28 crystals grown at IKZ using the float-zone method (FZ).

Under these preconditions, PTB succeeded in determining the number of silicon-28 atoms in a crystal sphere of 1 kilogram total mass, with the required uncertainty of less than 2 x 10 to the power of -8.

In order to guarantee the necessary purity of the crystals grown from this material, various material-intensive molten-zone cleaning steps are necessary. The special challenges were therefore the approx. 1000 times higher material price compared to conventional silicon as well as the limited amount of material availability.

Silicon is regarded as a very comprehensively investigated semiconductor material that dominates microelectronics and thus communication technologies worldwide. The IKZ will continue to work on the extreme requirements for the further improvement of material properties in order to enable future applications such as artificial intelligence and quantum technologies.

„IKZ´s expertise on isotope pure Si crystals, developed during this metrology project, will allow us to play in the next round a key role as materials science institute for the development of innovative quantum technologies”, states Prof. Dr. Thomas Schröder, Scientific Director at IKZ.