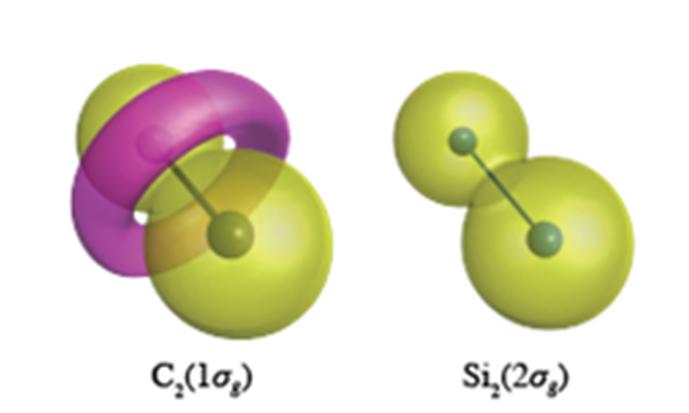 Inner core electrons are expected to have a peanut like wavefunction as is shown for Si2s electrons (right). In the C-C bond, however, the C1s electrons form a torus like feature of opposite polarity, shown in pink in left figure. Credit: Yokohama National University

YNU researchers resolve the age-old mystery of why silicon cannot replace carbon in organic compounds. A new benchmark quantum chemical calculation of C2, Si2, and their hydrides for the first time reveals a qualitative difference in the topologies of core electron orbitals of organic molecules and their silicon analogues. Other elements with a similar propensity as carbon to reshape their core electron nodal structures upon chemical bonding are proposed.

Since the discovery of silicon and Wöhler's success in cheating nature by synthesizing organic compounds, Wöhler himself was among the first (in mid-19th century) to suggest replacing carbon by silicon in organic compounds. It became clear in the early 20th century that silicon does not have a chemistry similar to carbon, and dreams of silicon-based life only survive in science fiction.

We know empirically that carbon has the capability to form a variety of unsaturated compounds, which silicon has not. However, the root cause of why only carbon has such capability has remained a mystery.

Quantum chemical calculations of unprecedented accuracy carried out at YNU reveal that core electrons (which were not supposed to participate in chemical bonding) have a very different role in the unsaturated compounds of carbon and silicon.

Carbon has the propensity to alter the topology (nodal structure) of its core electrons, which for C2 results to the formation of a torus like ring in the 1σg orbital formed of C1s electrons (see Figure). Si2, however, maintains the spherical like core orbitals centered at each atomic site in all its molecules. This flexibility of carbon's core orbitals allows carbon to form a cornucopia of different valence bond structures, whereas silicon is restricted to bond structures orthogonal to the atomic like spherical core orbitals.

The impact of this discovery can be far reaching. Core electrons have thus far been assumed more or less inert, but perhaps it becomes necessary to reassess their contribution to chemical bonding — at least in the case of unsaturated bonds. Finally, it is suggested that other elements, such as nitrogen, phosphorous, and fluorine, exhibit similar flexibility to modify their core electron topologies, and thus, exhibit similarly rich chemistries.

Yokohama National University (YNU or Yokokoku) is a Japanese national university founded in 1949. YNU provides students with a practical education utilizing the wide expertise of its faculty and facilitates engagement with the global community. YNU's strength in the academic research of practical application sciences leads to high-impact publications and contributes to international scientific research and the global society. For more information, please see: http://www.ynu.ac.jp/english