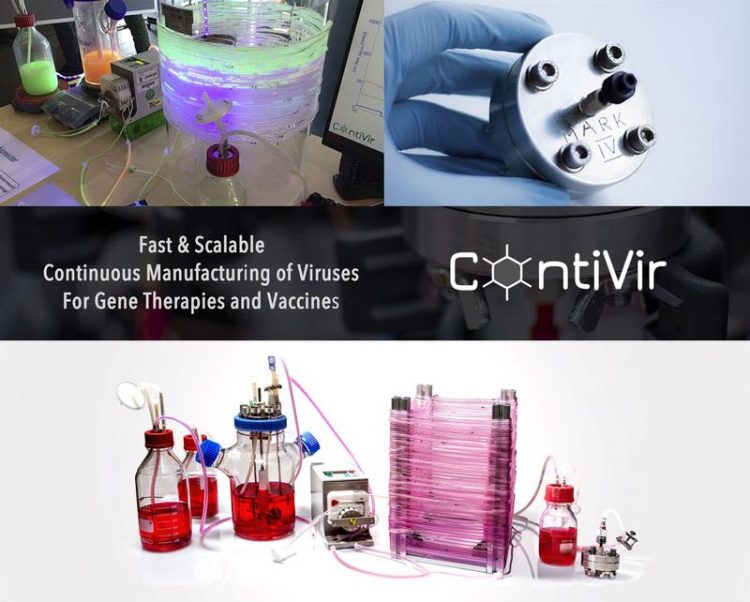 Gene therapies have shown the promise to become the next medical revolution for combating a wide variety of currently untreatable diseases. The most common delivery method for gene therapy are with viral vectors: genetically engineered viruses used as vehicles to introduce genetic material into the patient’s cells to replace defective genes by healthy ones. Currently, gene therapies cost from hundreds of thousands to millions of euros per patient.

A major bottleneck in the supply of viral vectors is requirement for high dose titers and inefficient production techniques based on batch technologies meant for laboratory use. The latter are incredibly difficult to scale-up for commercial production and require large amounts of time and labor.

The EXIST-Transfer of Research project started aims to tackle some of the manufacturing issues described above by combining two disruptive new technologies established by the Bioprocess Engineering group of the MPI Magdeburg.

The first technology is a continuous tubular bioreactor developed by Felipe Tapia in the Upstream Processing team of PD. Dr. Yvonne Genzel. This bioreactor is the first fully continuous system for the production of virus particles and has a footprint twenty times smaller than current batch systems. Additionally, continuous processes have higher productivity than batch cultures for large volumes, consume less energy, and require less labor.
original

The viral vectors produced in the tubular bioreactor will be purified with a membrane-based chromatography technique developed by Pavel Marichal in the Downstream Processing team of Prof. Dr. Michael Wolff (now at the Technische Hochschule Mittelhessen, University of Applied Sciences in Giessen, Germany).

Both technologies will be integrated in a fully continuous manufacturing process that has the potential to meet the future demand of viral vectors to make gene therapies widely available to the general population.

This manufacturing platform can also be used to support the production of viral vaccines in large quantities during pandemics, such as the current coronavirus outbreak that is considered by many countries as the worst crisis since World War 2.

The project will be carried out in the laboratories of the MPI Magdeburg and the Otto von Guericke University Magdeburg.