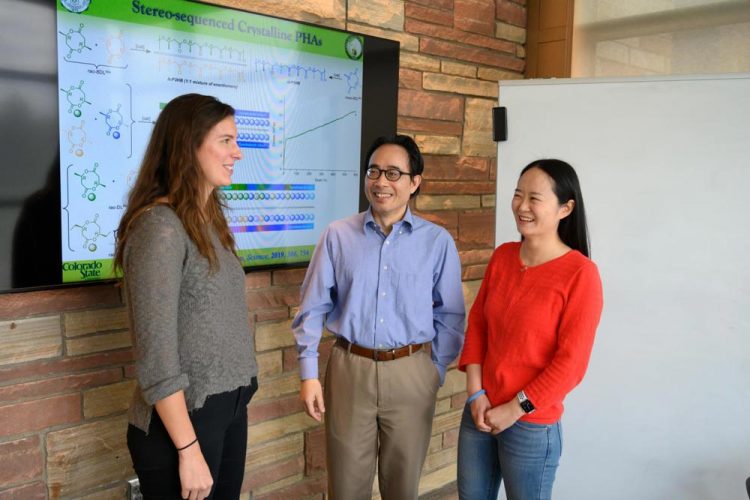 A tide of public momentum is swelling against the crisis of petroleum-based plastics, which are sitting in our landfills, floating in our oceans, and showing up in our air and even our food.

Meanwhile, in a Colorado State University chemistry laboratory, polymer scientists are toiling toward what they think is a viable solution. Every day, they are working on new chemistry for sustainable materials that could compete with, and eventually even replace, the hard-to-recycle, non-degradable commodity plastics that have overwhelmed our environment for decades.

Eugene Chen, professor in the Department of Chemistry, has led a new study demonstrating a chemical catalysis path for making an existing class of biomaterials – already gaining momentum in industrial settings – even more commercially viable and structurally diverse. The results are published in the journal Science, and the paper includes first author Xiaoyan Tang and graduate student co-authors Andrea Westlie and Eli Watson.

In recent years, Chen has focused some of his lab's efforts on a set of biomaterials called PHAs, or polyhydroxyalkanoates. They're a class of polyesters, produced by bacteria, that are biodegradable to a degree not seen in commercial plastics. They beat out “compostable” bioplastics made out of polylactic acid (PLA) by degrading naturally in oceans and landfills, whereas PLA needs to be composted industrially. Some see PHAs as a beacon in a dark, plastics-filled world, with companies already trying to create an industry around such bio-based materials.

But PHAs have their limitations. They are made in bioreactors where communities of bacteria convert biorenewable carbon feedstocks, such as sugars, into the simplest form of PHA, called poly(3-hydroxybutyrate), or P3HB. Different carbon sources and bacteria can also make other PHA derivatives. These biosynthesis setups are currently expensive, relatively slow and hampered by their limited scalability and productivity.

In their Science paper, Chen and colleagues attack those limitations one by one, offering a novel, chemical synthetic pathway for making conventional and new PHAs with enhanced, tunable, mechanical and physical properties. These are the very characteristics that made petroleum plastics so ubiquitous in our world.

The CSU polymer chemists report that their new polymerization methodology is enabled by catalysts that directly polymerize a bio-sourced monomer called 8DL that exists in a form called stereo-isomers. The catalyzed polymerization produces orderly, crystalline, so-called “stereosequenced” PHAs. In the lab, the researchers showed their materials' ductility and toughness, and their ability to tune the structure and function of their materials.

“We wanted to solve the bottleneck issue,” Chen said. “How can we develop the chemical catalysis pathway to this fantastic class of biodegradable plastics so that you have, basically, scalability, fast production and tunability to make different PHAs? … That was the motivation.”

This work built on previously published research that appeared in Nature Communications. Then, the researchers used their chemical synthesis pathway to make P3HB, one of 150 PHA biomaterials. But P3HB is relatively brittle, making it impractical for many petroleum plastics applications of today.

Chen stresses that he is not an expert in biosynthetic pathways for making PHAs. However, his lab is offering the technologically advantageous chemical catalysis approach to both existing and new PHA materials – which could play a big role in solving the plastics crisis of our generation.