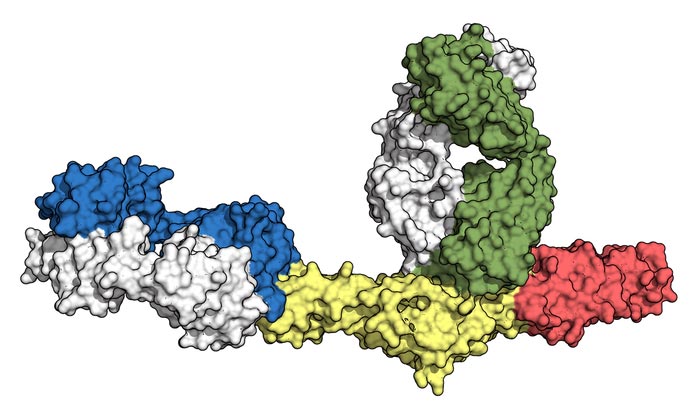 A 3D atomic map, or structure, of the Gc protein (red and yellow) bound to two antibodies (green, blue and white) produced by a recovered CCHF patient. The Gc protein is a key molecule on the surface of the CCHF virus enabling it to infect cells.
Credit: Akaash Mishra/University of Texas at Austin

… is latest use of new strategy against diseases.

Using the same approach they recently used to create effective vaccine candidates against COVID-19 and respiratory syncytial virus (RSV), scientists are tackling another virus: the tick-borne Crimean-Congo hemorrhagic fever (CCHF). It causes death in up to 40% of cases, and the World Health Organization identified the disease as one of its top priorities for research and development. The results appear today in the journal Science.

Using what scientists refer to as structural virology, a research consortium called Prometheus reconstructed the first 3D atomic-scale maps, or structures, of an infection-causing part of the virus that allows it to infect host cells. The team also determined how two neutralizing antibodies, fished from recovered patients, disrupt the virus’s ability to infect a cell, which together with the structural information, offers insights for developing therapeutics against the virus.

The research echoes a key approach that scientists, including The University of Texas at Austin’s Jason McLellan, have used in recent years to fight COVID-19 and RSV, signaling the emerging prominence of structural virology—the use of exquisitely detailed imaging of viral components to find their weaknesses—in preventing pandemics and curbing infectious disease.

“Crimean-Congo hemorrhagic fever is a terrible disease and is endemic in Africa, Asia and Europe, without any approved vaccines or antibody therapies to date,” said McLellan, a professor of molecular biosciences and a co-corresponding author on the study. “With structural virology, we’re finding out the secrets of these proteins on the surface of viruses and their vulnerabilities—and that helps us to build better therapeutics and vaccines.”

Directed by Kartik Chandran, professor of microbiology and immunology at the Albert Einstein School of Medicine, the Prometheus team is made up of McLellan’s and other academic labs, biotech companies and the U.S. Army Medical Research Institute of Infectious Diseases. The consortium previously identified two antibodies from recovered CCHF patients that potently neutralize the virus. They then combined the virus-binding regions from the two antibodies to produce a “bispecific antibody” that clears infections in sick mice and protects uninfected mice from the CCHF virus. They’re now working to develop a more stable version that could be tested in human clinical trials.

“Let’s say a researcher, health care worker or a military person from the U.S. needs to visit the Middle East or Africa,” said Akaash Mishra, a University of Texas at Austin graduate student in McLellan’s lab and first author of the paper. “Before they go, they could get a prophylactic shot with one of these antibodies to protect against infection. This is called passive immunization and would protect them for several weeks to months.”

The bispecific antibody could also help patients already infected with CCHF to recover from infection and prevent mortality. Insights from the research could also be used for the creation of a future vaccine.

The CCHF virus relies on a shape-shifting molecule on its surface, called the Gc protein, to fuse with host cells. To effectively stop the virus from infecting a cell, a therapeutic agent needs to target the protein’s pre-fusion shape. McLellan’s lab used X-ray crystallography to determine the structure of the pre-fusion Gc protein bound to neutralizing antibodies from recovered patients. Meanwhile, the lab of Félix Rey at Institut Pasteur determined the post-fusion shape.

By studying the pre-fusion and post-fusion shapes and locating where various antibodies bind, the researchers determined that one antibody prevents the Gc protein from changing into the post-fusion shape, and the other prevents it from inserting part of itself into the membrane of a host cell. This helps explain why these two antibodies combined are so effective at blocking the virus from infecting cells.

CCHF is primarily transmitted by ticks, and infectious disease experts warn that the threat of the virus could grow, as the tick responsible for its spread is found in more places due to climate change and other factors.

“Not many people had heard about coronaviruses before COVID-19 became a pandemic,” Mishra said. “I think we need to be better prepared with such emerging viruses, which may not be causing an epidemic at this point in the U.S. but still have major potential for future outbreaks.”

The Prometheus consortium is supported by U.S. National Institute of Allergy and Infectious Diseases grant U19 AI142777. McLellan and Mishra’s work was additionally supported by The Welch Foundation.