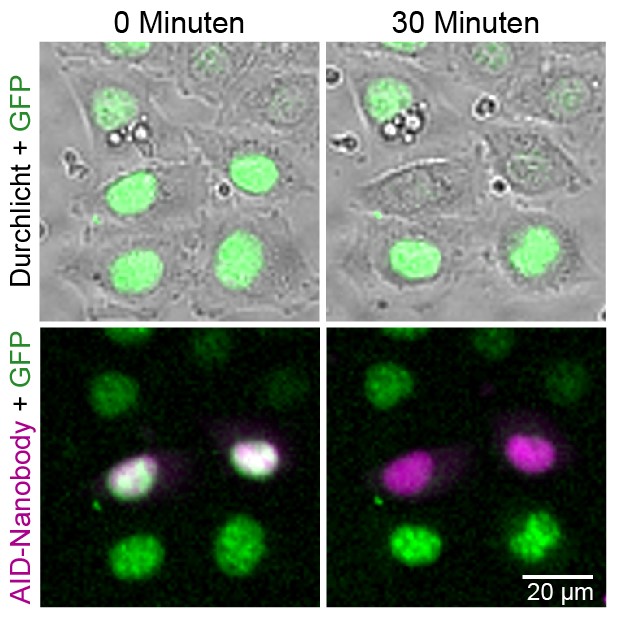 Perhaps the most important basic component of all cells are proteins that perform a wide variety of functions in cells and tissues. In order to clarify the physiological roles of proteins, they are often linked to a green fluorescent protein (GFP) via targeted genetic manipulation, which makes them visible under the microscope.

The observation of such GFP-linked proteins in living cells allows initial conclusions about the function of the protein. However, the exact function of a protein can often only be determined when the protein is removed and the resulting consequences become visible in cells, tissues or model organisms.

This is usually achieved by knockout of the protein on the genetic level. However, the functions of essential proteins cannot be examined in this way, because the cell or the model organism would not be viable. Instead, an approach is needed that allows removing proteins from cells only at a specific time.

Such a targeted temporary degradation of proteins occurs naturally in plants and is mediated by the plant hormone auxin. After genetic manipulation, the underlying mechanism can also be applied to animal and human cells.

Dr. Jörg Mansfeld's research group has developed a novel AID-nanobody in order to not only observe GFP-linked proteins in living cells, but to also rapidly degrade them in a targeted manner for functional analysis. For this purpose, the auxin recognition sequence (AID) was linked to a GFP recognizing antibody that is structurally-related to camelid antibodies (nanobody).

It could be shown that this so-called AID-nanobody allows the almost complete degradation of GFP-linked proteins in human cell culture after the addition of auxin. The possibility to follow the degradation of the protein “live” under the microscope makes functional analysis much easier.

In collaboration with the research group of Dr. Caren Norden, it was shown that the AID-nanobody can also be successfully used in the model organism zebrafish. Using the AID-nanobody in zebrafish demonstrated for the first time that an auxin-mediated protein knockdown can also be implemented in a complex vertebrate model.

“Our work is an excellent example of biotechnology, in which different naturally occurring principles such as fluorescent GFP from algae, auxin-dependent protein degradation from plants and the nanobody from camelids are combined to answer previously inaccessible research questions,” said Dr. Katrin Daniel from the Mansfeld Lab, commenting on the results of the research project.

The successful work highlights the synergies that can be achieved, when groups from different research institutes at the Dresden Science Campus work closely together.

Funding
Jörg Mansfeld is supported by the German Research Foundation (DFG) (Emmy Noether; MA 5831/1-1) and receives funding from the European Research Council (ERC) under the European Union’s Horizon 2020 research and innovation program (grant agreement no. 680042). Katrin Daniel received funding from the Maria-Reiche-Programme of the TU Dresden. Caren Norden was supported by the German Research Foundation (DFG) [SFB 655, A25] and the by the Human Frontier Science Program (CDA-00007/2011).

The Biotechnology Center was founded in 2000 as a central scientific unit of the TU Dresden with the goal of combining modern approaches in molecular and cell biology with the traditionally strong engineering in Dresden. Since 2016 the BIOTEC is part of the central scientific unit “Center for Molecular and Cellular Bioengineering” (CMCB) of the TU Dresden. The BIOTEC plays a central role in the “Molecular Bioengineering and Regenerative Medicine” profile of the TU Dresden, fostering developments in the new field of Biotechnology/Biomedicine. The center focuses on cell biology, nanobiotechnology, and bioinformatics.