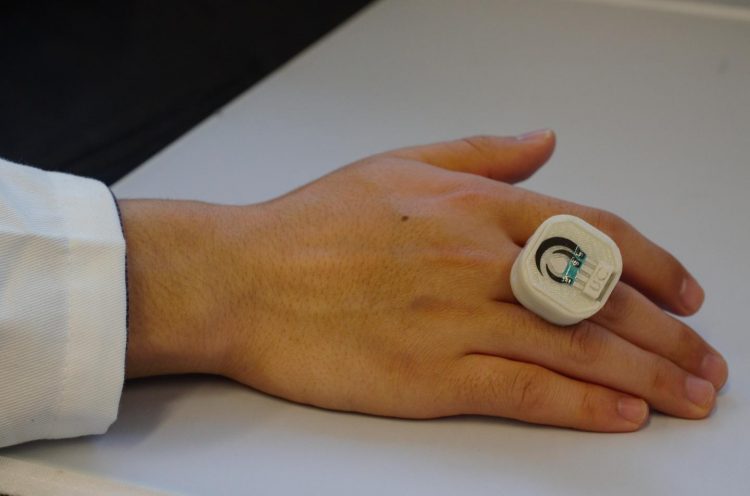 According to a global analyst firm called CCS Insight, wearable electronics will be a $34 billion industry by 2020. Wearable chemical sensors currently in development include those made in the form of tattoos, mouth guards, wristbands and headbands, but all of these types of sensors face challenges.

For example, a sweat sensor worn on an arm could be useful, but patients would need to produce enough sweat for the device to be successful. There is a demand for sensors that are compact, affordable, noninvasive and can be incorporated into everyday life. But more advanced sensors can be costly and difficult to produce.

Joseph Wang and colleagues at the University of California, San Diego wanted to develop a portable, affordable, wearable sensor that would detect external chemical threats.

The team designed their sensor as a ring that can be worn on a finger. The ring has two parts, an electrochemical sensor cap for detecting chemical and biological threats, and a circuit board under the cap for processing and sending data wirelessly to a smartphone or laptop.

It can perform voltammetric and chronoamperometric measurements, which allow the ring to detect a wide array of chemical threats. The team exposed the prototype to explosives and organophosphate nerve agents, both in vapor and liquid phases.

The ring was highly selective and sensitive. Although this ring-based sensor was designed to detect explosives and organophosphate nerve agents, the researchers say the device could be expanded to other hazardous environmental or security agents.

The authors acknowledge funding from the Defense Threat Reduction Agency Joint Science and Technology Office for Chemical and Biological Defense.

The American Chemical Society is a not-for-profit organization chartered by the U.S. Congress. ACS is the world's largest scientific society and a global leader in providing access to chemistry-related research through its multiple databases, peer-reviewed journals and scientific conferences. ACS does not conduct research, but publishes and publicizes peer-reviewed scientific studies. Its main offices are in Washington, D.C., and Columbus, Ohio.