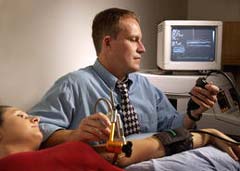 Duke University Medical Center researchers have shown an association between changes in nitrate, a biochemical marker of nitric oxide production, and physiological changes in arteries’ reaction to stress. They hope their discovery could eventually lead to a non-invasive method of determining which patients are at risk for developing cardiovascular disease.

Such a simple diagnostic is important, they said, because up to half of patients who develop heart disease do not have the typical risk factors. Furthermore, using this new approach, the researchers demonstrated that exercise improved the marker in patients at risk for developing cardiovascular disease.

In their pilot study, the researchers linked the systemic production of nitric oxide, a chemical known to play a key role in controlling the ability of arteries to constrict or relax, with changes in the endothelial lining of arteries after being stressed.

“This is the first study to attempt to link whole body production of nitric oxide with regional endothelial function,” said Jason Allen, Ph.D., who presented the results of the Duke study today (Nov. 22, 2003) during the 10th annual scientific sessions of the Society for Free Radical Biology and Medicine. “Both measures were found to discriminate between healthy participants and those with diagnosed cardiovascular disease.”

In addition to its ability to dilate arteries, nitric oxide has other properties that protect against cardiovascular disease, such as inhibiting blood platelet clumping, preventing smooth muscle proliferation within the artery and inhibiting the immune response.

On the other hand, other risk factors, such as diabetes, high blood pressure, mental stress and smoking can reduce nitric oxide’s protective properties, said the researchers. It is believed that these patients produce more oxygen free radicals, impairing the ability of the body to respond appropriately to nitric oxide. These oxygen free radicals are highly reactive chemicals that are the potentially destructive byproducts of the disease process.

In their experiments, the researchers divided 37 participants into three groups – healthy (12), those who had two or more identified risk factors but without clinical diagnosed cardiovascular disease (15), and those with known disease (10).

To determine how arteries responded physiologically under different circumstances, Allen used ultrasound to visualize the brachial artery, the major artery of the arm. The ultrasound images can then be analyzed to detect even the slightest changes in the diameter of the artery.

The researchers made detailed measurements at three time points – baseline, while the artery was being occluded by a tourniquet, and after the tourniquet was released.

While the diameters of arteries in all three groups increased, the healthy group saw the largest percentage increase after 60 seconds, possibly indicating greater endothelial health and nitric oxide production.

To better understand the biochemical responses in the patients, Allen then took blood samples from all the participants at rest, immediately following a strenuous exercise test, and then ten minutes after exercise completion.

“The group of healthy participants was the only one that saw an increase in systemic nitric oxide during the recovery period after exercise,” Allen explained. “We also found that the reactivity of the brachial artery was greater in the healthy patients when compared to those with cardiovascular disease.”

Allen then sought to discover whether a sustained program of exercise had any effect on nitric oxide production and reactivity of the brachial artery. So, he followed seven of the participants in the “at-risk” group during six months of exercise carried out on cycle ergometers, treadmills or elliptical trainers in a supervised setting. After six months, the researchers performed the same series of ultrasound and biochemical tests again.

After the exercise period, the at-risk patients had a significant increase in nitric oxide metabolite production during the recovery period after exercise, as well as an almost doubling of the brachial artery reactivity, Allen said.

“First, it appears that a nitric oxide metabolite measured in the blood after exercise may discriminate between healthy patients and those with cardiovascular disease and is related with a physiological response of the artery diameter,” Allen said. “Also, these biochemical and physiological markers can be positively influenced by exercise in patients who are at risk for cardiovascular disease.”

This pilot project was funded by Duke’s division of cardiology. Joining Allen was Frederick Cobb, M.D., from Duke, and Andrew Gow, Ph.D., Children’s Hospital of Philadelphia.