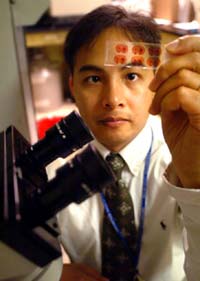 A compound that enables squirrels to hibernate may one day help minimize brain damage that results from stroke, according to a researcher at the Medical College of Georgia and Veterans Affairs Medical Center in Augusta.

In an animal model for stroke, delta opioid peptide reduced by as much as 75 percent the damage to the brain’s striatum, the deeper region of the brain and a major target for strokes, according to Dr. Cesario V. Borlongan, neuroscientist.

In fact, evidence suggests that the compound, which puts cells in a temporary state of suspended animation, may help protect brain cells from the ravages of Parkinson’s disease as well.

“When the animals were introduced to an experimental stroke, then injected with delta opioid peptide, we could see a reduction in the damage done by stroke; brain damage is reduced and the neurological deficits associated with stroke are definitely reduced,” Dr. Borlongan said.

More extensive animal and human studies are needed but Dr. Borlongan said the peptide, which occurs naturally in man and may play a role in the body’s effort to protect the brain, should one day minimize stroke damage.

His stroke work garnered the International College of Geriatrics Psychoneuropharmacology Award presented this month at the college’s annual meeting in Barcelona, Spain.

The original insight about squirrels and delta opioid peptide came from work by Dr. Tsung-Ping Su at the National Institutes of Health. In the 1980s, Dr. Su was studying hibernation and found increased levels of the compound. Dr. Su also found that when he gave non-hibernating squirrels more of the compound, the previously hyperactive critters began hibernating even in the summer.

Although there’s no hard evidence that humans hibernate, they do have endogenous levels of delta opioid peptide that Dr. Borlongan believes may play a role in natural protective mechanisms.

During hibernation, levels of the peptide increase and the metabolic rate and energy demands of the entire animal drop dramatically. That led Dr. Borlongan to wonder if that same state might help protect brain cells specifically. “Our thinking here is that if we take this drug, probably brain cells are going to go into this mode of hibernation. So if you get a stroke or some other neurological disorder, most of the brain cells will be protected.”

When Dr. Borlongan gave high doses of the compound to the animal model for stroke, the rats — which are not known to hibernate — looked sleepy in the hours following but recovered dramatically. In fact, at least in rats, the levels of endogenous peptide increased immediately following a stroke, which makes him suspect that the levels may also increase in humans.

Patients who receive more of this compound in the hours after stroke — much as many now receive TPA or aspirin — may get significant protective benefits. “The oxygen needs were dramatically reduced: that is how it works to protect the brain,” Dr. Borlongan said of the animal cells.

To study the role in Parkinson’s, he put varying levels of delta opioid peptide into a culture containing dopaminergic cells, which produce dopamine, a key cell communicator deficient in Parkinson’s. He found that those that got the most peptide survived the longest. In an animal model for the disease, the reduction in dopamine levels was far less in the animals receiving the highest doses of delta opioid peptide.

These findings, presented at the Barcelona meeting and reported partially in the journals NeuroReport and Cell Transplantation, point to the potential of the compound but also to the need for additional animal studies before moving toward clinical trials, Dr. Borlongan said.

One critical issue is that the animal model for stroke has only a single stroke and the majority of humans have a second stroke within months. One of his many goals is to develop a better animal model and see if compounds such as delta opioid peptide and TPA can help patients avoid subsequent strokes.

Other issues that need study are potential side effects, such as how well do the cells function after hibernation; animal models were sleepy while getting the drug but they functioned well afterward, he said. “My feeling is that sleep could be a correlate of hibernation.”

The researcher believes this cell hibernation may have other roles as well, including slowing the aging process. Its potential for helping donated livers, hearts and kidneys remain viable longer until they are transplanted already is being explored by others in clinical trials.

Dr. Borlongan, who joined the MCG faculty in February after completing a senior staff fellowship at the NIH’s National Institute on Drug Abuse, had NIH support for his work prior to joining the MCG faculty. He now has a VA Career Development Award. Several grant applications are pending.

This summer he also received the Rafaelsen Fellowship Award from Collegium Internationale NeuroPsychopharmacologicum in Montreal for his work in brain-cell protection strategies and neural transplantation. And, he was recently elected a councilor for the American Society for Neural Transplantation and Repair.