Home / Physics and Astronomy / Magnetism shapes beauty in the heavens
01.11.2002

Magnetism shapes beauty in the heavens 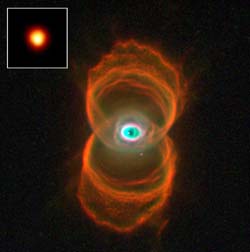 Using a technique based on the work of the 1902 Nobel Prizewinner, Pieter Zeeman, an international team of astronomers have, for the first time, provided conclusive proof that the magnetic field close to a number of aging stars is 10 to 100 times stronger than that of our own Sun. These observations suggest a solution to the long outstanding problem as to how, at the end of their lives, a perfectly spherical star can give rise to the complex and often far from spherical structure seen in the resulting planetary nebula – some of the most beautiful objects in our heavens.

When stars like our Sun reach the end of their lives, they eject a large amount of material into the space around them. This material, produced by nuclear fusion reactions in the star, forms a thick dust shell which eventually evolves into a planetary nebula – so called because they appear rather like planetary discs. Due to turbulent gas flows around the star the strong magnetic fields that have been discovered will have very different shapes. The material which is ejected from the star “feels” this strong magnetic field and so, as a result, the planetary nebula can have a very complicated structure. The ejected material, containing elements such as carbon and oxygen, in eventually recycled into new stars and planets and the building blocks of life itself.

The group, lead by Wouter Vlemmings of Leiden Observatory, observed 4 old stars with the U.S. National Science Foundation`s VLBA, the network of radio telescopes operated by the American National Radio Astronomy Observatory. They detected radio emission which originates from clouds of water vapor ejected by the stars. In some circumstances, such a cloud can become a maser: the equivalent of a laser for radiation with longer wavelengths. One specific frequency of the emitted radiation, which is characteristic for the H2O molecule, is amplified enormously, resulting in a bright, clear signal. In this signal, the group was able to detect the Zeeman-effect for the first time: subtle changes in the spectrum of the emission that can only be caused by a strong magnetic field at the location of the maser.

The Zeeman-effect, which has enabled these observations to be made, was named after the Leiden physicist Pieter Zeeman, who discovered the effect of a magnetic field on the spectrum of a light source in 1896. As this effect is extremely small in water molecules, the observations for the research by Vlemmings had to be extremely precise. Because of this, the data of the different telescopes of the VLBI-network were specially processed in the correlator at Socorro, New Mexico, USA to give the highest possible accuracy.

The astronomers, whose work has just been published in Astronomy & Astrophysics, were Wouter Vlemmings of Leiden Observatory, Philip Diamond of the University of Manchester and Huib Jan van Langevelde of the Joint Institute for VLBI in Europe (JIVE).