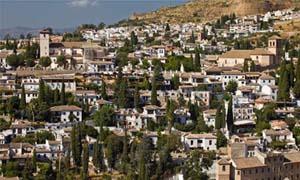 These are cypresses in the historical neighborhood Albayzin, in Granada. You can see how symbolic (and common) these trees are to the region. Photo credit Paloma Cariñanos Gonzalez

Among the ranks is Paloma Carinanos, a professor of Botany at the University of Granada, in Spain. Rather than sitting back with a box of tissue, Dr. Carinanos has taken a more proactive approach to fighting her seasonal allergies. She studies how the trees in urban green spaces contribute to and even cause allergies.

Carinanos' interest in studying allergies started early. She and her seven brothers and sisters all suffer from seasonal allergies, a trait they inherited from their father. “Since I was young, I became an expert in everything associated with this disease, its symptoms, how to prevent it, avoid it, or treat it.” Carinanos said. Despite this early interest in plants and allergies, she originally planned to attend veterinary school. But she says, “I think that my destiny was written, and I was admitted to the Faculty of Biology of the University of Cordoba.”

Now she is an expert in the conservation and management of plants and wildlife. With her team, she studies how the plants in urban green spaces affect the air quality of that area. Then they look at how the air quality affects human health. Her team specifically studies the city of Granada, Spain. This city's climate and layout is like that of many cities in the Mediterranean area, which has the highest occurrence of pollen allergies in the world. The researchers hope their efforts will lead to fantastic urban green spaces that don't cause allergic reactions for 30% of the city's population.

To start, Carinanos and her team began by classifying the trees in Granada's ten largest green spaces. They grouped the trees into three categories. Then they recorded the type of pollination, the length of the pollination period, and the potential for causing allergies for each tree. The researchers used all of this information to calculate if the green space was negatively affecting air quality and causing allergies.

What the researchers found was surprising. Many of the most common trees in Granada were among the trees causing unhealthy or hazardous air quality. Carinanos also found it surprising that the design of these green spaces thought about landscaping, climate, and fashion criteria, but didn't think about pollen problems.

From their findings, the researchers have made suggestions for planning future green spaces. Their recommendations are to make sure that all citizens can enjoy the great outdoors with clear eyes and dry noses. Carinanos says that in the future, urban green spaces “will become 'comfort islands' inside 'urban heat islands.'” She wants to make sure these comfort islands are “for all citizens without exception.”

This research may be just what allergy sufferers have been waiting for, and it's good news for others, too. Carefully selecting trees for green spaces may help combat climate change. Increasing the variety of trees in green spaces can both decrease allergies and increase the urban vegetation's ability to clean pollutants out of the air.

Carinanos and her team stress that their research is a tool for planning and prevention. They hope that other cities will be able to use their methods to prevent high allergen levels. Doing so may help growing city populations live more comfortably and with fewer health issues. The researchers ultimately want to ensure that urban green spaces play a role in keeping both the climate and people healthy.

Read more about Carinanos' research in a special section of the Journal of Environmental Quality, The Urban Forest and Ecosystem Services.