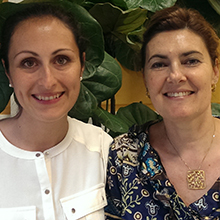 Specifically, the team headed by Dr. Natalia Pellegata of the Institute of Pathology (PATH) at the Helmholtz Zentrum München conducted a study on pheochromocytomas (PCCs). Pheochromocytomas are active adrenal gland tumors, the majority of which are benign.

However, if they become malignant and spread to other tissues, the prognosis for these patients is poor. This is mainly due to the fact that currently the only treatment available for PCCs is their surgical removal. In order to develop new treatment therapies, the researchers initially examined the molecular mechanisms behind this disease.

“Our initial data from patient samples shows that the growth factor BMP7 is found frequently overexpressed in samples from PCC patients,” recalls first author Ines Leinhäuser. In further studies, the Helmholtz scientists examined the possible consequences of a higher level of this protein. In various functional tests, they were able to prove that elevated levels of BMP7 promote PCC cell division and cell migration. Conversely, if the protein is targeted for knockdown, this results in less invasive cells.

The researchers identified a particular signaling pathway as the cause of this effect on the cells. “The PI3K/mTOR pathway is activated by the BMP7 protein and conveys signals for the cells to divide as well as to migrate,” explains team leader Pellegata. In order to verify this mechanism and to test potential future treatments, the team used two molecules.

One molecule inhibits the signal transmission of BMP7; the other blocks the PI3K/mTOR downstream signaling pathway. “In an animal model of PCC we were able to show that treating the tumors with substances inhibiting BMP signaling can lead to an increase in apoptosis*,” Pellegata adds. Although further tests will be needed in order to confirm these results, the cancer researchers hope that they have found a new approach to future treatments.

Background:
* Apoptosis is the process of programmed cell death. It serves to remove degenerate or potentially harmful cells. Apoptosis also occurs during development, for example during the regulation of cell numbers, and thus influences tissue size or the regression of skin webbing.

The Institute of Pathology (PATH) contributes to the identification and characterization of molecular mechanisms and pathways, which are relevant for disease development and progression. We endeavor to understand the interplay between environment and genetic, and to identify novel targets for therapeutic intervention.