Home / Health and Medicine / Being in the wrong place can set off an allergic reaction
05.05.2020

Being in the wrong place can set off an allergic reaction 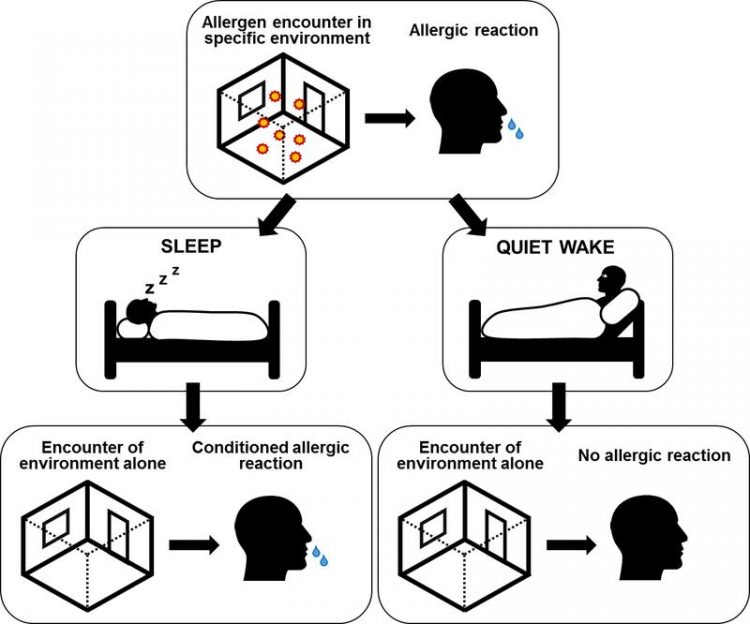 Allergic reactions can occur without being triggered by an allergen such as grass or birch pollen – it is enough for the patient to be back in the same place in which he or she was previously exposed to the allergen, as researchers at the University of Tübingen have found.

However, this kind of conditioned reaction to an intrinsically neutral and harmless situation only happens after a sleep phase that follows the conditioning.

The new study on the influence of psychological factors on allergic reactions was led by Dr. Luciana Besedovsky and Professor Jan Born from the Institute of Medical Psychology and Behavioral Neurobiology.

The findings go some way towards explaining why allergic reactions are frequently observed as a form of placebo reaction when the original allergen is not even present. The study has been published in the latest Proceedings of the National Academy of Sciences.

The research team recruited volunteers with allergic rhinitis, who were then given a nasal spray containing their respective allergens (grass or birch pollen) in a neutral test room. The strength of the allergic reaction occurring in the test persons was measured by the amount of a specific enzyme in the nasal secretion.

Half of the test persons went to sleep for eight hours after this experiment, while the other half had to stay awake until the following evening. One week later, the experiment was repeated in the same test room. But this time no allergens were given. “The test persons reacted with allergic rhinitis already shortly after entering the room – but only those from the group that slept,” says Besedovsky.

Test persons who remained awake did not have an allergic reaction upon returning to the room in which the experiment was conducted, Besedovsky adds. Nor did members of the group who slept suffer a reaction in another place they were taken to in the second week.

The brain is a fast learner

“Just as in a conventional learning process, the sleep phase played a decisive role in our study. Only through sleep did the brain firmly connect a certain environment with an allergic reaction,” says Jan Born, adding that this is the first experimental proof that a specific location alone can trigger an allergic reaction.

The researchers believe that – as in many memory-building processes – the hippocampus plays a role in conditioning the organism to respond to its environment. And the hippocampus functions in a sleep-dependent manner.

“It is astonishing how quickly the immune system learns the mismatched reaction. In the experiment, a single allergen dose was sufficient to link the allergic reaction with the environment,” Besedovsky says. Deciphering this learning mechanism is a boost to research into both allergies and sleep.

However, it is hard to draw simple conclusions on how to improve the situation of allergy sufferers. After all, they have to sleep – especially as sleep has a positive effect on other, helpful immune reactions.