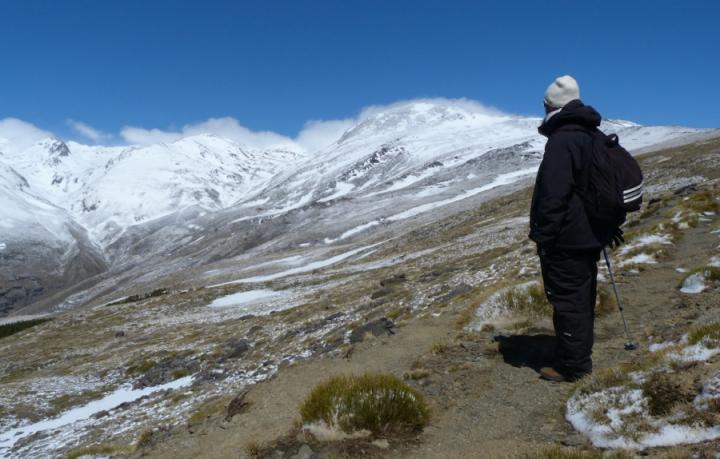 The research Rafael Pimentel during his field work Credit: University of Córdoba

The research community works on this task with hydrological models, which are tools that enable them to represent processes in the hydrological cycle, and are able to obtain, for example, predictions about river flow using primarily rainfall data (though also other atmospheric variables such as temperature, solar radiation, land features and plant development can be used).

These tools usually use a hydrological basin as a unit of measurement, with a basin being a unit of land whose water flows toward the same point.

Researcher Rafael Pimentel from the Fluvial Dynamics and Hydrology research group at the University of Cordoba, worked for two years at the Hydrology Unit of the Swedish Meteorological and Hydrological Institute (SMHI) where he participated in shaping the first global model on a basin scale.

The model used was HYPE, a model designed in said unit for comprehensive water management in Sweden and previously used on a European scale.

The modelling process was challenging but feasible according to the research staff since it was applied to more than 130,000 basins that cover the world's land mass (except for Antarctica).

The main challenge was compiling data and evaluating their quality, as well as calibrating the model, that being the process of testing the river flow model data and the observed data to assess whether or not the model was working properly.

Due to the complexity of representing the great array of global hydrological processes, the model's performance varied. Generally speaking, the model provides good results, with an average value of over 0.4 in the Kling-Gupta Efficiency metric (KGE), which is an index used to quantify the goodness of a hydrological model which classifies models of 0.4 or more as good.

The Eastern US, Europe, Japan and areas of Russia, Asia, Canada and South America were the areas with the best results, with KGE values of over 0.6, demonstrating a high potential for its use in performing seasonal forecasts of river flow in these areas.

Using these weather data in a six-month period, it is possible to predict river flow data for the next six months. This prediction is quite useful for staff at reservoirs and hydroelectric power plants who could, with the help of these data, manage and plan their resources better and more precisely.

The challenge of scaling and quantifying the goodness of this model, in addition to verifying the geographical location of lakes, rivers and reservoirs so that it all coincides when scaling the model, was possible thanks to the amount of free access hydrological data that are available to the research community as well as to the general public, though the river flow data in this case was scarce in many areas.

This shows how open access and shared knowledge helps hydrology progress. Nevertheless, there is a lack of information, especially regarding river flow, in many areas of the world with which to carry out this verification. Thus, the idea of creating a network of collaborative science has been proposed.

Using this network, researchers, managers, consultants and students working in these areas with hydrological information on a local scale could assess the model in those areas. The corresponding part of the model would be provided to those interested, with the idea of working together to verify and adjust the model by means of workshops during which the locals would give their feedback. In this way, the model's representation of reality on a global scale would improve.