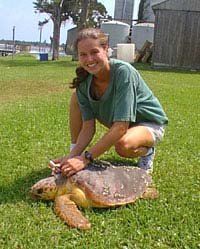 Jennifer Keller prepares to take a blood sample from a loggerhead sea turtle as part of her doctoral studies at Duke University. Keller is now a NIST post doctoral researcher. <br>Photo by Larisa Avens/NMFS

Loggerhead sea turtles may be getting sick because of environmental exposure to toxic organic chemicals, such as polychlorinated biphenyls (or PCBs) and pesticides, according to a new study led by Duke University, with collaboration from the National Institute of Standards and Technology (NIST), and other organizations.

Released on April 21 in the online edition of Environmental Health Perspectives, the study found that turtles with higher concentrations of contaminants had poorer health. The authors note that the correlations suggest, though do not prove, a cause-and-effect link.

The new study is the first to investigate sea turtle health effects linked to a class of chemicals called organochlorines that are known to sicken other wildlife. Scientists took blood and fat samples from 48 live juvenile turtles captured in North Carolina waters and carried out clinical health assessments. Duke then worked with NIST researchers to measure the samples for concentrations of 80 different PCB and pesticide compounds. The research team found significant correlations for a wide variety of biological functions, suggesting, for example, changes in the immune system, possible liver damage, and possible alterations in protein and carbohydrate regulation.

The data may help scientists understand and address population declines in sea turtles, all species of which are threatened or endangered.

The NIST work was performed at the Hollings Marine Laboratory in Charleston, S.C., in which NIST is a partner. Researchers from the New England Aquarium and North Carolina State University also collaborated on the sea turtle research. Funding was provided by the Morris Animal Foundation, Disney Wildlife Conservation Fund, Oak Foundation, and Duke University Marine Biomedical Center.