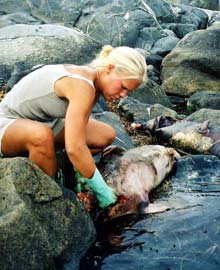 A researcher gathers samples from this summers outbreak along the Swedish west coast. <br>Photo by: Tero Härköne, Göteborg University.

Scientists from Göteborg University in Sweden and the Woods Hole Oceanographic Institution (WHOI) report in an upcoming issue of the journal Ecology Letters that the 2002 outbreak of phocine distemper virus, or PDV, in European harbor seals may reduce the population by more than half and that future outbreaks with similar characteristics would significantly increase the risk of population declines. Their findings are the first epidemiological data reported on the 2002 outbreak, which is still underway, and may help predict the recurrence of the outbreaks and the impact on the long-term growth and survival of the European harbor seal population.

The current outbreak of PDV, also called the seal plague, was first identified in May 2002 when large numbers of dead seals were reported in Denmark. By mid-September the number of deaths had passed 6,000 in Denmark and had spread to the Baltic, the Wadden Sea and East Anglia. A 1988 outbreak from the previously undescribed virus spread from Denmark to Sweden, the Netherlands and then to England, Scotland and Ireland, in what is now believed to be the largest such event in any marine mammal population. Within seven months all major European harbor seal colonies had been affected by the virus, although the death rate varied from 15 to 58 percent among regions. The virus is thought to have been introduced to the European harbor seal population by migrating harp seals observed in Danish waters in 1987 and 1988. No outbreak of the virus had been reported since 1988 until this year.

Biologist Hal Caswell of WHOI, one of the authors of the report, and his colleagues used mathematical models based annual aerial surveys of populations and collections of dead seals in an intensive sampling program along the west coast of Sweden. They compared the 2002 findings to information obtained in the 1988 outbreak, and although the 2002 outbreak is still underway, predict that it will have similar impacts on the harbor seal population.

Study authors Karin Harding and Tero Härkönen of Göteborg University and Caswell of WHOI have begun to explore how the frequency and severity of these seal plague outbreaks affect population dynamics. They note that while it is generally believed that survivors develop a life-long immunity to PDV, they estimate that no more than seven percent of the current European harbor seal population is made up of survivors of the 1988 outbreak and therefore believe immunity plays almost no role in the 2002 outbreak. The authors predict that 10,000 seals will die from PDV in 2002 in Sweden and Denmark alone.

“This is, to our knowledge, the first study where the consequences of PDV outbreaks have been evaluated in terms of quasi-extinction,” the authors say. “The risk of a catastrophic decline of the population is small, but other factors, like hunting, will increase that risk, as will more frequent PDV outbreaks.”

“PDV is now a recurring risk to harbor seal populations, they note. “It is important to begin to develop more elaborate population models that include age and sex structure, seasonal behavior, and other factors to help us monitor this situation.”