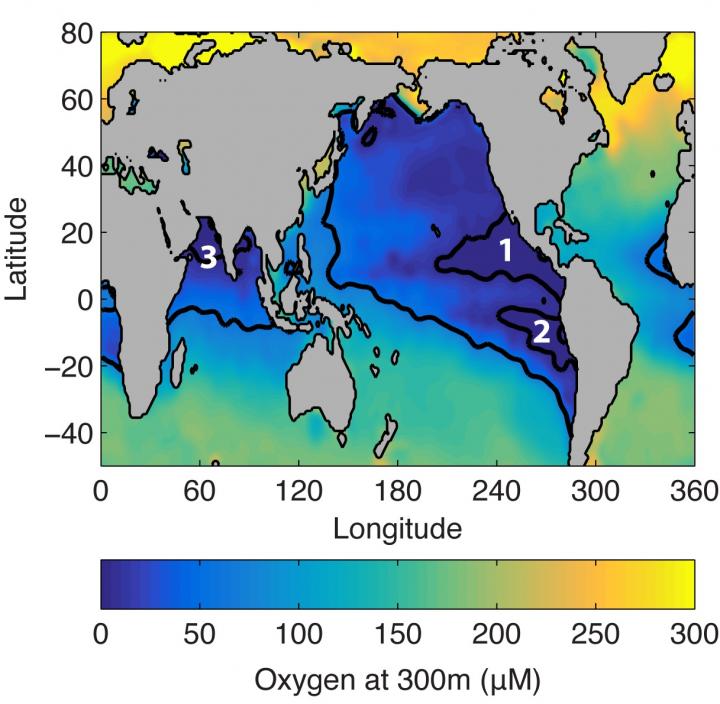 There are three regions in the ocean with exceptionally low oxygen levels; two off the coast of the Americas, just north and south of the equator (numbers 1 and 2) and one in the Arabian Sea (number 3). These areas are known as "dead zones" because only anaerobic microbes can survive here. Credit: Thomas Weber / University of Rochester

According to new research by Thomas Weber, an assistant professor of Earth and environmental sciences at the University of Rochester, small microenvironments in the deep ocean may hold key clues to the global cycling of nitrogen in seawater.

In a paper published in Nature Geoscience, Weber and his co-author Daniele Bianchi, an assistant professor of atmospheric and oceanic sciences at UCLA, show that small microbes that remove nitrogen from the water exist in these microenvironments and are more widespread than previously thought. Using this data, they developed a computer model that changes the way we think about the marine nitrogen cycle.

“The previous understanding of the nitrogen cycle was that nitrogen was lost from the ocean only in three regions where oxygen is scarce. If we wanted to predict how the nitrogen cycle would respond to climate change, all we needed to do was predict how these three low oxygen regions would expand or contract,” Weber says. “Our study changes that picture by showing that nitrogen loss is actually happening over much larger regions, and we need to think about how the ocean as a whole is changing.”

Most marine organisms “breathe,” or respire, using oxygen. When oxygen is not present in seawater, microbes instead respire using other compounds like nitrate, a form of nitrogen. “This has the net effect of removing the nitrogen from the ocean,” Weber says.

Researchers previously believed anaerobic microbes–small microorganisms and bacteria that do not need oxygen to respire–were only found in pockets of the ocean with exceptionally low oxygen levels; particularly, three regions known as “dead zones.”

Weber and Bianchi have developed a computer model that takes into account new genetic data gathered from ocean microbes. The data indicates that anaerobic microbes exist not only in areas of unoxygenated water, but somehow thrive in areas of the ocean where there is oxygen. Nitrogen, therefore, may be lost across much of the ocean, not just in areas where oxygen is scarce.

“One of the biggest revolutions in oceanography in recent years has been the genomic revolution,” Weber says. “Oceanographers have been able to measure all of the genes present in seawater.” One of their discoveries was that the genes allowing anaerobic respiration are not just found in the three regions; the genes have been found much more widespread throughout the ocean.

Whenever oxygen is available, there should not be organisms that respire anaerobically, Weber says. “They should be outcompeted by things that use oxygen, because that's a much more efficient way to respire.”

How then, do these anaerobic organisms survive in areas where oxygen is present?

Weber and Bianchi found that small “microenvironments” depleted of oxygen exist all over the deep ocean in organic-rich “marine snow”–particles of organic matter, such as dead plankton cells and zooplankton feces, stuck together. Microbes gain energy by eating the organic matter and using oxygen to respire. If the respiration is intense enough inside the particles, all the oxygen can run out and the microbes will switch to respire using compounds besides oxygen.

“We suggest that anaerobic microbes may thrive in vast swaths of the oxygenated ocean, within sinking organic 'marine snow,'” Bianchi says. “This changes the way we think of the nitrogen cycle and, more generally, anaerobic metabolism in the ocean, and suggests that both could respond to climate change in ways that challenge our current understanding.”

Global warming causes ocean temperatures to rise, resulting in an increased loss of oxygen, which can then affect the nitrogen budget across the globe. When humans perturb one part of the system, it can have unexpected effects. But computer models can help better predict these consequences.

“Ocean warming is occurring because of human carbon dioxide emissions, which warm the earth as a whole,” Weber says. “Indirectly, this alters the oxygen and nitrogen content of the ocean. Eventually marine phytoplankton growth and their ability to take up carbon dioxide is impacted, which then feeds back on climate change. Our new work and other modeling efforts will help us better plan for these consequences.”