Start of work for the world's largest electric truck 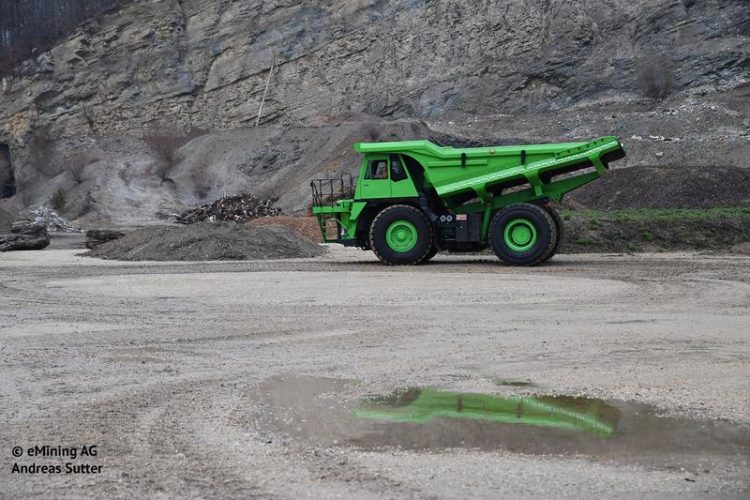 The world's largest electric vehicle with an empty weight of 58 tons and a payload of 65 tons has been christened “Lynx” on April 20 in the presence of numerous representatives from business and politics and will start its work next week in the quarry of Vigier Ciment. The electric dump truck designed over the past 18 months is an example of successful applied research in Switzerland.

This interdisciplinary cooperation has set three world records. The eDumper is the largest and most powerful battery-powered electric wheeled vehicle in the world. For this purpose, the largest battery ever produced for an electric vehicle was installed, which weighs 4.5 tons and is as heavy as two complete passenger cars.

Brakes are for winners!

The eDumper will transport lime and marl rocks from a higher mining area to a lower processing plant. During the fully loaded descent, the batteries are charged by recuperation of braking energy. According to preliminary calculations, the electricity generated in this way is largely sufficient for the unloaded return journey uphill to the mining area. Thus, the vehicle would be be a zero-energy vehicle. The exact energy balance of the eDumper will be shown by investigations in everyday operation over the next few months.

From diesel engine to electric drive

The environmentally friendly eDumper was completely rebuilt on the basis of a diesel-powered Komatsu HD 605-7 dump truck. In order to optimally dimension the electric drive, researchers at the Bern University of Applied Sciences at the Institute for Energy and Mobility Research IEM equipped the conventional model with a variety of sensors so that numerous measurement data could be obtained.

Among other things, the necessary torque at the cardan shaft and the power output of the engine are measured together with the respective driving condition and the GPS data of the vehicle.

The BFH Energy Storage Research Centre then dealt with the evaluation of suitable battery cells and the cooling of a battery module. The suitable Li-ion cells were selected and one of the battery modules assembled with the selected battery cells was tested in a special test facility housed in a ship container.
In order to guarantee the longevity and robustness of the technology, the Interstate University of Applied Sciences Buchs investigated the vibrations of the diesel dump truck in real use and the heat emission of the battery cells of the future eDumper.

This research team also designed the thermal management for the battery pack, calculated the necessary strength of the battery holders and the design of the welding seams. It is also responsible for monitoring the eDumper battery in real use.

To ensure the fire safety of such a large battery cell, the Swiss Federal Laboratories for Materials Science and Technology Empa examined the behavior of the Li-Ion cells used in the event of a short circuit or mechanical damage. Never before has a land vehicle been equipped with such a huge battery pack. The eDumper is now designed in such a way that a failing cell cannot affect neighbouring cells.

Not only the design of the eDumper was done in Switzerland, also the components were partly from Swiss medium-sized companies: the actual conversion took place at Kuhn Schweiz AG in Lommis (TG) and Heimberg (BE). The synchronous drive motor (Oswald Motoren GmbH), gearbox (Puls Getriebe GmbH), batteries (Lithium Storage GmbH) and inverters (Aradex AG) are all custom-made products based on the latest generation of industrial products. They were installed in the empty chassis of the KOMATSU HD 605-7 in September/October 2017.

The hydraulic pumps for the multi-disc brake system, tilting drive, servo support and preload of the secondary brake system are driven by another 200 kW electric motor from the Berner Oberland (Brienzer Motoren AG). The 600kWh power storage, consisting of 4 blocks, is located in the engine compartment and instead of the diesel tank. The project is supported by the Swiss Federal Office of Energy (SFOE).