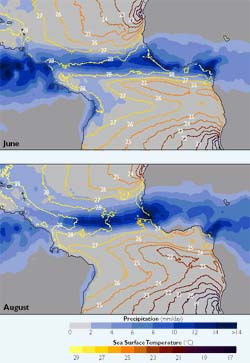 The first season is in the late spring and early summer. The rain is concentrated on the West African Coast near the Gulf of Guinea, five degrees north of the equator. This season appears strongly influenced by sea surface temperatures off the coast of West Africa.

The second season arrives later in summer in July at around 10 degrees north of the equator. Atmospheric waves moving westward over the Atlantic Ocean appear to play a major role in this summer season monsoon rainfall, according to the research using NASA’s Tropical Rainfall Measuring Mission (TRMM) satellite. These waves, called African Easterly Waves, are evident in the rain patterns.

The research results appeared in a recent issue of Journal of Geophysical Research and in a paper in the Journal of Climate. Additional research will explore connections between African Easterly Waves and hurricane activity.

“Most people agree the later season is determined by the atmosphere, but we found the early spring monsoon is determined by being close to the ocean,” said Guojun Gu, lead author of the study. Gu is a researcher at NASA’s Goddard Space Flight Center (GSFC), Greenbelt, Md., and the Goddard Earth Sciences and Technology Center at the University of Maryland, Baltimore County. “Also, if the spring rain is weak, then the summer monsoon is strong, and vice versa,” Gu said.

A study from 1998 to 2002 of daily rainfall from the TRMM satellite, combined with information from other satellites, defined the evolution of the African monsoon. This very high- quality dataset of rainfall rates helped determine the distinct northward “jump” in the monsoon from the early summer season to the later summer episode.

In the May to June season, large differences in sea surface temperatures between coastal waters and water further out to sea lead to increased rainfall. When coastal waters are warm and equatorial waters are colder, rainfall is stronger along the coastline. The July monsoon is related to the easterly waves. These waves carry a great deal of moisture and provide the seasonal monsoon rain before moving off the west coast of Africa.

Previous research suggests the African Easterly Waves may kick off small circulations that develop into hurricanes over the North Atlantic Ocean. Up to 80 percent of the major hurricanes that impact the eastern United States may originate with these waves. “You can track a hurricane backward in time to waves coming off the African coast and all the way to the mainland of Africa,” said Robert Adler, a co-author and researcher at GSFC.

The African Easterly Waves occur only during summer months, from May through October. While the waves vary greatly in strength from year to year, their numbers stay consistently at about 60 to 70 per year. These waves consist of low- pressure systems that pass every three to four days, with a wavelength of about 2000 to 2500 kilometers. More study is needed to better understand how variations in the waves impact hurricanes.

The researchers also found the nature of these waves shifts at about the 15-degree north line. The waves that pass south of this line carry moisture and create convection that lead to rain clouds. These southern waves play a role in both the later summer monsoons and the genesis of hurricanes. But waves that pass north of the 15-degree line carry hot dry air from the Sahara. These waves may carry tons of dust as they move west with trade winds. In about a week they can carry dust all the way to the Gulf of Mexico and Florida.

The mission of NASA’s Earth Science Enterprise is to develop a scientific understanding of the Earth System and its response to natural or human-induced changes to enable improved prediction capability for climate, weather, and natural hazards.