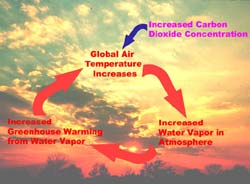 In response to human emissions of greenhouse gases, like carbon dioxide, the Earth warms, more water evaporates from the ocean, and the amount of water vapor in the atmosphere increases. Since water vapor is also a greenhouse gas, this leads to a further increase in the surface temperature. This effect is known as “positive water vapor feedback.” Its existence and size have been contentiously argued for several years.

Ken Minschwaner, a physicist at the New Mexico Institute of Mining and Technology, Socorro, N.M., and Andrew Dessler, a researcher with the University of Maryland, College Park, and NASA’s Goddard Space Flight Center, Greenbelt, Md, did the study. It is in the March 15 issue of the American Meteorological Society’s Journal of Climate. The researchers used data on water vapor in the upper troposphere (10-14 km or 6-9 miles altitude) from NASA’s Upper Atmosphere Research Satellite (UARS).

Their work verified water vapor is increasing in the atmosphere as the surface warms. They found the increases in water vapor were not as high as many climate-forecasting computer models have assumed. “Our study confirms the existence of a positive water vapor feedback in the atmosphere, but it may be weaker than we expected,” Minschwaner said.

“One of the responsibilities of science is making good predictions of the future climate, because that’s what policy makers use to make their decisions,” Dessler said. “This study is another incremental step toward improving those climate predictions,” he added.

According to Dessler, the size of the positive water vapor feedback is a key debate within climate science circles. Some climate scientists have claimed atmospheric water vapor will not increase in response to global warming, and may even decrease. General circulation models, the primary tool scientists use to predict the future of our climate, forecast the atmosphere will experience a significant increase in water vapor.

NASA’s UARS satellite was used to measure water vapor on a global scale and with unprecedented accuracy in the upper troposphere. Humidity levels in this part of the atmosphere, especially in the tropics, are important for global climate, because this is where the water vapor has the strongest impact as a greenhouse gas.

Using the UARS data to actually quantify both specific humidity and relative humidity, the researchers found, while water vapor does increase with temperature in the upper troposphere, the feedback effect is not as strong as models have predicted. “The increases in water vapor with warmer temperatures are not large enough to maintain a constant relative humidity,” Minschwaner said. These new findings will be useful for testing and improving global climate models.

NASA’s Earth Science Enterprise is dedicated to understanding the Earth as an integrated system and applying Earth system science to improve prediction of climate, weather and natural hazards using the unique vantage point of space. NASA plans to launch the Aura satellite in June 2004. Along with the Terra and Aqua satellites already in operation, Aura will monitor changes in Earth’s atmosphere.