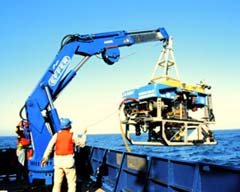 A new generation of remotely operated vehicle (ROV) capable of routine operation to depths of 6,500 meters (21,320 feet) and communicating its data back to shore via the Internet has been developed by the Woods Hole Oceanographic Institution (WHOI). The vehicle, JASON II, recently completed its first science cruise off the coast of Washington and Oregon and is currently at sea in the Pacific working off the coast of Hawaii.

The $2.5 million project to build JASON II and upgrade its companion vehicles, the imaging system Argo II and the DSL-120 side scan sonar system, began in 2000. All three systems, designed and built by WHOI’s Deep Submergence Laboratory, are part of the U.S. National Deep Submergence Facility operated by WHOI for the U.S. ocean sciences community. The facility, the only one in the nation, includes the three-person submersible Alvin as well as the tethered vehicles and provides scientific access to the deep sea for researchers from many disciplines, including biology, geology, and chemistry.

Funds for the JASON II project were provided by the National Science Foundation, Office of Naval Research, and The W.M. Keck Foundation of Los Angeles, CA. The combination of federal and private funds enabled WHOI to significantly enhance the manipulative, sampling, thrust and payload capabilities of the original JASON, built in the late 1980s and capable of reaching 6,000 meters (19,680 feet) depth, and enabled major upgrades to the fiber optic telemetry, control and power systems of all the vehicles. The funds also enabled the Institution to integrate existing vehicle data systems and control displays into a web-based system through the use of SeaNet. SeaNet extends Internet capabilities to oceanographic research vessels using a variety of wireless communication links. The $1 million grant from the Keck Foundation was used to purchase the new components of JASON II and equipped the ROV and other tethered systems with the SeaNet remote-data communication and visualization system to send images and data ashore to researchers via the Internet. The Keck funds also suuported the development of the JASON II virtual control van, a software system designed to extend capabilities of the actual control van at sea to researchers ashore. These are the first vehicles in the U.S. using the SeaNet system.

Construction of JASON II began in 2001 and was completed this summer. Dock trials were held in Woods Hole in June and July, followed by a short test cruise at sea in late July. The first fully operational science cruise for JASON II was successfully completed in September aboard WHOI’s Research Vessel Atlantis. The Institution’s Deep Submergence Laboratory is also working with British colleagues from the Southampton Oceanography Center to build a vehicle similar to JASON II for their research use, to be called ISES. The two vehicles were developed in parallel, with major new components tested first on JASON II.

“JASON II is a state-of-the-art facility and will have a profound impact on how scientists access and study the oceans, which comprise 70 percent of our planet,” WHOI Vice President for Marine Operations Richard Pittenger said. “Over the past ten years ROVs and tethered vehicles have altered the paradigm of deep-sea research, providing major contributions to the understanding of many seafloor and deep earth processes. On its very first science cruise, JASON II has already proven its value to the research community, and we expect it will contribute significantly to the complex science programs proposed for the next decade and provide a new scientific approach to the exploration of the deep sea. We have just begun to tap the capabilities of this new research vehicle.”

The flexibility and endurance of ROVs and tethered systems like Argo II and DSL-120 allow scientists to work in new ways and dramatically increase productivity. They can remain on the ocean floor for days at a time, sending back images and data 24 hours a day to a team of researchers on the surface ship. The SeaNet system allows the data collected to be distributed over the Internet, enabling scientists ashore to become involved in real-time analysis and decision-making about operations at sea hundreds or thousands of miles away. These vehicles also provide backup search and survey capability to the United States Navy in times of national need, and act as engineering research and development platforms for advances in control techniques and sensor technology being pursued at WHOI’s Deep Submergence Laboratory.

“It is all about sampling and manipulation,” says Andrew Bowen, project manager for the JASON II vehicle and a member of WHOI’s Deep Submergence Laboratory. “We have been able to put into practice a lot of the things we have learned from ten years of operating JASON. We basically took the best of that vehicle, which worked very well, and took advantage of developments in technology in the past few years to design and build a much more capable system.”

Bowen notes that like its predecessor, JASON II has high quality still and video cameras, but they are now digital, and many more environmental sensors. JASON II has far more power to support lights and other systems, increased maneuverability through its thrusters, and much more sampling capacity. Each of the two new manipulators on the vehicle are capable of picking up 150 pounds each and reaching twice as far as the original vehicle’s single manipulator, which could pick up 25 pounds.

“Essentially every system on the new vehicle has been upgraded from the original, making this an extremely capable vehicle, Bowen adds. “Given the success of our first cruise, scientists are very excited about using the vehicle. That is a very different reaction from what we encountered with the original vehicle so many years ago, but a very welcome and positive sign for the future.”

Bowen notes that a lot has changed since JASON was developed in the late 1980s. “We had to build our own fiber optic telemetry system back then because it didn’t exist anywhere else. A lot of the systems were new, and we were facing not only the use of new technology but science users cautious about an unproven tool. Now, the users know how successful JASON was and are learning how much more capable JASON II is. The process has been much easier this time around.”

JASON extensively explored and photographed deep-sea hydrothermal vents along the mid-ocean ridge, surveyed and imaged ancient shipwrecks, installed permanent ocean floor observatories, and advanced the field of deep sea forensics with detailed surveys of sunken commercial ships. After participating in dozens of varied and historic expedition around the world JASON was retired in 2001. JASON II will expand many of the scientific programs in these and other areas.

“The original JASON played a significant role in gaining acceptance by the oceanographic research community of remotely operated vehicles as a general science tool,” says Bowen. “That was not the case in the late 1980s, when scientists were very skeptical that an ROV had the capabilities to do the work they needed. It was something new, and it took a while to prove its worth. JASON is a good example of how science adapts to new tools. Now, ROVS are accepted and scientists recognize the value of the tool and give us the opportunity to use it, and of course they are already demanding more improvement, more capability. This technology does not stand still.”