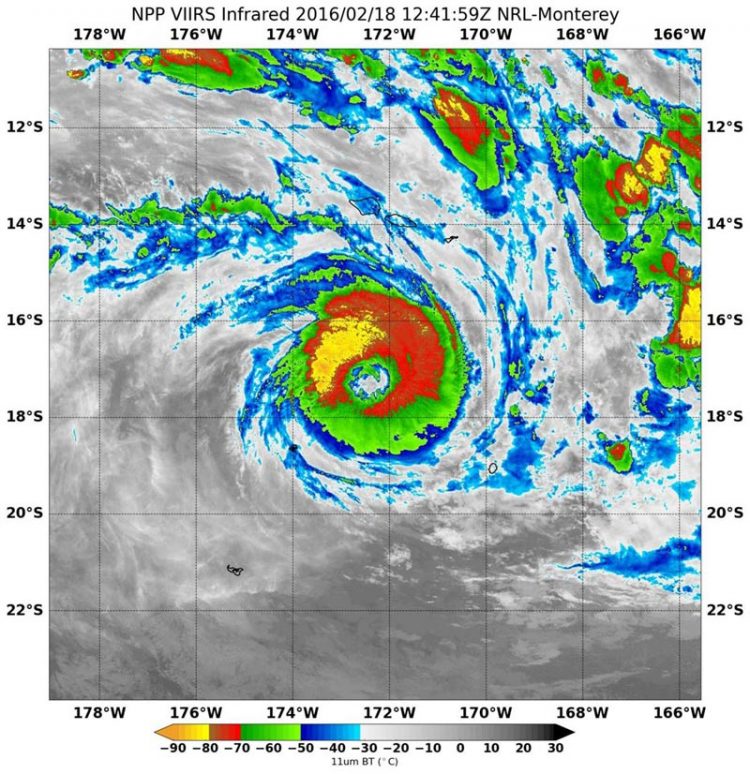 On Feb. 18, the gale warning for Niue has been cancelled now that Winston has moved west. However, a tropical cyclone alert is in force for Fiji, specifically the Lau group, Taveuni, Lomaiviti group, eastern half of Viti Levu, Kadavu. In Tonga warnings remain in effect. A storm warning is in effect for Vava'u and a gale warning is in effect for Niuatoputapu, Ha'apai, Tongatapu and 'Eua.

On Feb. 18 at 12:41 UTC (7:41 a.m. EST) NASA-NOAA's Suomi NPP satellite passed over Tropical Cyclone Winston and the Visible Infrared Imaging Radiometer Suite (VIIRS) instrument aboard saw very strong thunderstorms around the eye. Infrared date from VIIRS showed a large eye with tightly curved, strong bands of thunderstorms wrapping into the center. Strongest thunderstorms and coldest cloud tops were in the northwestern quadrant. Temperatures in storms there were as cold as minus 80 degrees Fahrenheit (minus 62.2 Celsius).

Animated enhanced infrared satellite imagery showed that Winston has a large, ragged eye with cloud-top cooling observed within the eye wall over six hours before 1500 UTC. When cloud top temperatures cool it means that the air is rising faster and stronger than before, pushing cloud tops higher into the troposphere (where temperatures are colder). Cooling cloud tops are an indication of a strengthening storm.

The Joint Typhoon Warning Center (JTWC) forecast expects Winston to strengthen to 110 knots (126.6 mph/203.7 kph) and then begin on a weakening trend from Feb. 19 as it tracks over cooler sea surface temperatures. By Feb. 20, Winston is forecast to run into increasing vertical wind shear which will also help to weaken the system.

JTWC calls for Winston to move closest to southern Fiji on Feb. 21. It is then expected to turn southeast. For updated warnings and information from the Fiji Meteorological Service, visit: http://www.met.gov.fj/aifs_prods/20036.txt.