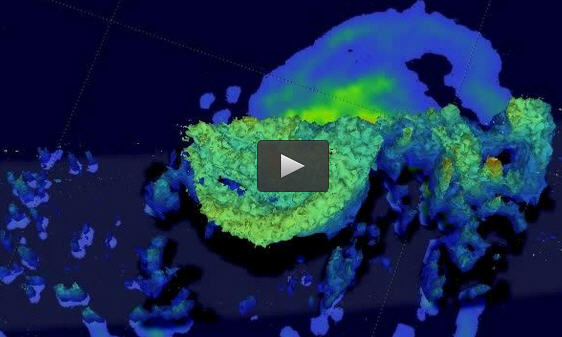 The GPM core observatory satellite flew over Ashobaa on the morning of June 8 at 0811 UTC (4:11 a.m. EDT). Tropical cyclone Ashobaa had sustained wind speeds of about 40 knots (46 mph) when the satellite passed overhead.

Satellite data on June 9 showed that the storm is tightly wrapped, although elongated as clouds and showers are being pushed to the west because of persistent moderate easterly wind shear.

The Joint Typhoon Warning Center (JTWC) predicts that tropical cyclone Ashobaa will become more powerful and have winds of 65 knots (about 75 mph) by June 10 as it moves through warm sea surface temperatures. Ashobaa is then predicted to weaken as dry stable air is expected to affect the system. It is forecast to turn west where it expected to make landfall on June 12 near Ras al Hadd, a village in the Ash Sharqiyah district in Oman.

As Ashobaa continues curving to the west in the Arabian Sea, it is generating rough surf along the coasts of Oman, southeastern Iran and Pakistan.

GPM's Microwave Imager (GMI) and Dual-Frequency Precipitation Radar (DPR) instruments measured rain falling at a rate of over 60 mm (2.3 inches) per hour in strong thunderstorms southwest of the storm's center of circulation.

At NASA's Goddard Space Flight Center in Greenbelt, Md., a 3-D view was constructed using data from DPR Ku band radar data. The 3-D view of GPM revealed Ashobaa had very powerful thunderstorms near the center of the newly formed storm reaching heights above 17 km (10.5 miles). These tall thunderstorms near the center of a tropical cyclone can be as sign that intensification will occur in the future.