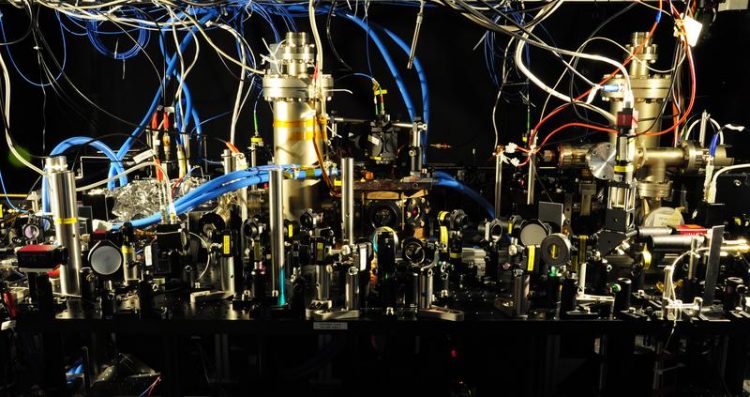 Experimental setup to generate a two-dimensional ultracold quantum gas In the background is the vacuum chamber in which the researchers prepared the quantum superfluid. The mirrors and lenses needed to create the laser trap are seen in the foreground. This apparatus allows the physicists to generate a two-dimensional ultracold gas every 15 seconds and then measure its properties. Photo: Martin Ries

Using an exotic quantum superfluid that originates in a two-dimensional atomic gas, researchers from Heidelberg University are closing in on the phenomenon of superconductivity. The team headed by Prof. Dr. Selim Jochim of the Institute for Physics is using this special gas as a model system to more easily study the largely unknown mechanism of the superfluid phase transition in 2D structures.

The researchers hope to gain new insight into the so-called room-temperature superconductor, a hypothetical material that does not require cooling to achieve lossless conduction of electricity. The research results were published in the journal “Physical Review Letters”.

Two of the most impressive phenomena that exhibit quantum mechanical behaviour in the “normal” world are superfluidity and its by-product, superconductivity. In physics, superfluidity is a state of matter in which a fluid loses all internal resistance.

Superconductivity results when the electrons in a material behave like a superfluid liquid. They flow without encountering any friction, and the electrical resistance drops to zero. This state occurs only below a certain critical temperature, which is different for every superconductor.

This behaviour is well understood in the conventional superconductor, in which the electrons move in three dimensions. But the problem is that the superconducting state can only be achieved at very cold temperatures well under negative 200 degrees Celsius. The necessary extensive cooling hampers a technological application, according to physicist Dr. Martin Ries.

“For several years, it has been possible to produce high-temperature superconductors. Their critical temperature is significantly higher, but unfortunately still just under negative 130 degrees Celsius. Additionally, we only have a partial understanding of the way they work, making it difficult to develop better superconductors of this kind,” says the scientist, who is a member of Prof. Jochim’s research team.

As Dr. Ries explains, science assumes that electrons can only move in two dimensions in high-temperature superconductors. So the Heidelberg physicists focused their research into superfluidity and superconductivity on two-dimensional structures. The superfluid transition is quite different between 2D and 3D structures, and the two-dimensional transition mechanism remains largely a mystery that is difficult to pin down theoretically.

Although the so-called BKT theory did address it in the 1970s, it is only valid if the forces between the electrons are weak. “But what exactly happens with stronger forces is not known, and that is precisely the scenario of major significance,” says Dr. Ries.

Jochim’s team of physicists has now succeeded in building a simple model system to perform a quantum simulation of the superfluid phase transition in 2D structures. They are using a two-dimensional ultracold gas captured in a laser trap. “We are able to create a ‘clean’ system that is easier to understand and in which the quantum mechanical behaviour of the particles resembles that of the electrons in two-dimensional structures,” reports Dr. Ries.

It actually allowed the researchers to observe the transition into the superfluid phase at low temperatures and measure the critical temperature for any strength of interparticle forces. “This gives us the ability to more easily test the various theories for 2D superfluidity in the future,” explains Prof. Jochim, whose team is currently investigating the correlations in the superfluid phase. “Over the long term, we hope to gain a better understanding of high-temperature superconductivity that could lead to the development of a room-temperature superconductor at some point in the future.”

This research was conducted by a cooperation of experimental and theoretical physicists at Heidelberg University's Center for Quantum Dynamics. For their article published in the “Physical Review Letters”, the authors received the coveted “Editors’ Suggestion” distinction.