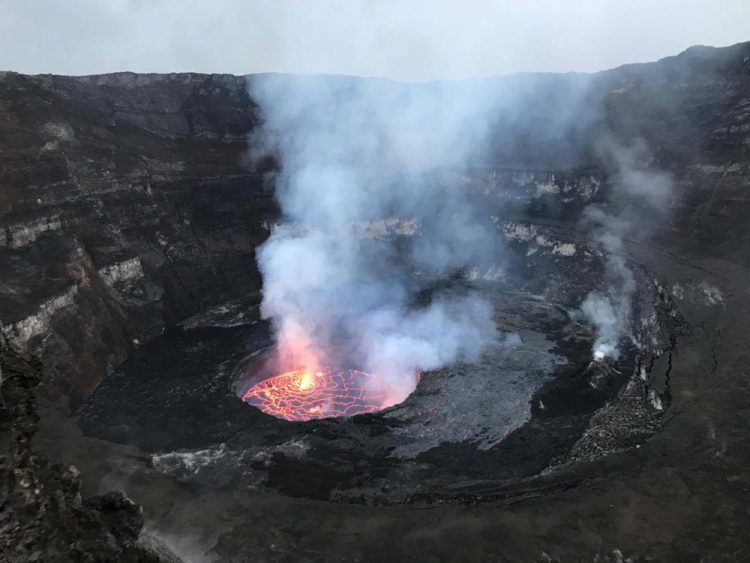 In a talk at the 2018 SSA Annual Meeting, Adrien Oth of the European Center for Geodynamics and Seismology discussed how he and his colleagues are using multiple methods to monitor lava lake levels at the volcano.

The researchers analyze seismic and infrasound signals generated by the volcano as well as data collected during satellite flyovers to measure Nyiragongo's lake level fluctuations.

During the eruption in 2002, which caused a major humanitarian crisis, the lava lake was drained and the depth of the remaining crater was estimated between 600 and 800 meters. About four months after the eruption, the crater started filling up again.

Nowadays, the inner crater floor is about 400 meters below the rim and the lava lake remains at high level.

Over the past few years, our consortium assisted the Goma Volcano Observatory to deploy one of the densest modern real-time telemetered monitoring systems in Africa. Combined with modern processing techniques, these newly acquired datasets provide unprecedented opportunities to investigate the behavior of this unique magmatic system.”

In combination with seismic and infrasound data, the scientists are using high resolution synthetic-aperture radar (SAR) images captured by satellites passing over the volcano to directly measure the rise and fall of the lava lake level.

These images measure the length of the shadow cast by the crater's edge on the lava lake surface, which can be used to calculate the lava depth.

The lava lake observations are only one piece of the puzzle within the regional volcanic system, and “will certainly be of key importance for successful eruption forecasting in the future,” said Oth and colleagues. “At this stage, however, these observations need to be first put into the larger context of the magmatic system in order to allow their proper interpretation in terms of eruptive processes.”

The 2018 Annual Meeting, held May 14-17 in Miami, Florida, is a joint conference between the Seismological Society of America and the Latin American and Caribbean Seismological Commission (LACSC).