3D scans for the automotive industry 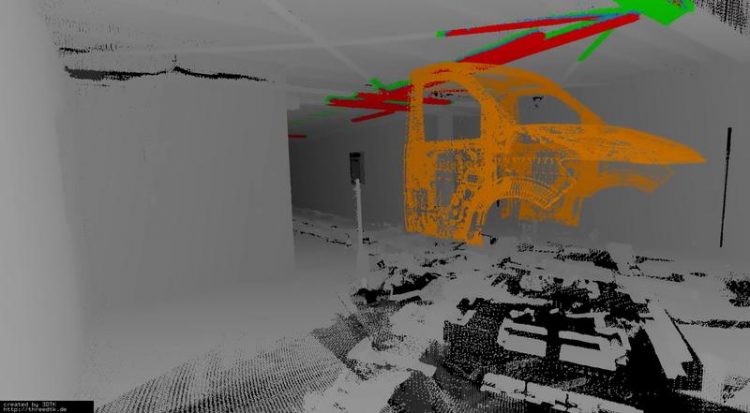 Section of an automotive production line and a simulated model as a 3D cloud of dots. The places where collisions would occur after a change of model are highlighted in red. Picture: Andreas Nüchter

The variety of car models has increased significantly over the past decades. Take Volkswagen: In 1950, the automaker produced just two model ranges – the Beetle and the transporter.

This number had grown to ten by 1990, and today around 20 different models are rolling off assembly lines. Counting all twelve makes of the Volkswagen Group, the number even totals 300 models – trucks, buses and motor bikes included.

Long gone are the times when one factory fabricated the same car for years on end. There is a trend towards more frequent model changes and smaller volumes. A car factory with just one production line suitable to manufacture multiple models is what the future will look like.

“This would require increased flexibility in production, more robots and a higher level of digitisation,” says Andreas Nüchter, Professor of Computer Science at the Julius-Maximilians-Universität (JMU) of Würzburg in Bavaria, Germany.

Nüchter is working to achieve to this goal. His team (Dorit Bormann, Florian Leutert, and Johannes Schauer) supports the group “Virtual Technologies of Corporate Research” of Volkswagen AG with the digitisation of production lines in preparation for a change of model: For this purpose, the computer scientists send a 3D scanner through the production line during live operation and then use the data to generate virtual three-dimensional images of the production facility. Subsequently, they simulate how the production line has to be converted to manufacture the new model.

Scanning and evaluating the data takes about a month. Why so much effort when there are construction plans of the production plant available? “These plans are never up to date, because minor adjustment are being made all the time during live production,” the JMU professor explains. “Previously, polystyrene models of the new car types were therefore sent through the production line to determine bottlenecks and other obstacles,” Nüchter says.

The solution of the Würzburg scientists is certainly more up to date. The 3D scanner moreover allows them to cover areas that are difficult to access such as the tunnels where the vehicles' paintwork is dried.

“We were commissioned by Volkswagen to go through this process for the new launches of the models Tiguan and Crafter,” Nüchter explains. It turned out, for example, that the ceilings of the production halls had to be converted to prevent collisions in the Crafter production.

What is challenging about this job is not to scan the production environment, but to evaluate the scan data. “This is why we are seeking to automate as much of this step as possible,” Nüchter explains. Presently, his team is also working on further developing the corresponding software.

But the activities for Volkswagen are just a by-product of Nüchter's research. His actual expertise is mobile robots that scan their surroundings using 3D scanning systems. “Ultimately, it's no big difference whether we operate a scanner on a mobile robot or let it pass through an automotive assembly line,” the professor states.