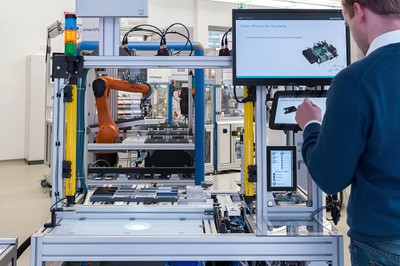 The future of production: integrating the human through scalable automation, control and communication through cyber-physical systems as well as standardized interfaces. SmartFactoryKL

“With their joint booth at SPS IPC Drives in Nuremberg (Germany), Europe's leading expert trade fair for electric automation, the Technology Initiative SmartFactory KL e.V. and the German Research Center for Artificial Intelligence (DFKI) will present a spectrum of their competences in the domain of Industrie 4.0 (hall 10, stand 540) from November 22 to 24, 2016. The exhibited demonstrators will show how the transfer of the Industrie 4.0 paradgim into industrial applications can succeed.”

In developing agile factory systems and human-machine-interaction, we see a great opportunity for the successful transfer of our Industrie 4.0 technologies into producing companies”, said Prof. Dr.-Ing. Detlef Zühlke, Director of the DFKI Research Department for Innovative Factory Systems and Chairman of Technology-Initiative SmartFactory KL e.V. about the trade fair presentation. Three demonstrators will be the booth highlight this year.

Thanks to Industrie 4.0, customers will be able to order individual products produced at low costs with short delivery time. Great order fluctuations require a compromise between high output and low unit costs as well as flexible operating costs. Taking this into account, SmartFactory-KL and the Research Department Innovative Factory Systems of the DFKI have developed a mobile demonstrator, which shows the future of production:

integrating humans through scalable automation, controlling individual production elements through cyber-physical systems and enabling their communication as well as expanding production plants through standardized interfaces. The module on exhibit produces customer-individually and in a flexible output amount.

Knowledge transfer on the shop floor

The assistance and collaboration system “AmbiWise” enables mobile and cross-location knowledge exchange in the company. The demonstrator which will be exhibited at the trade show demonstrates, amongst other things, how videos on maintenance topics, which were created by employees, are used as tutorials for new co-workers.

The development of AmbiWise by the Research Department Innovative Factory Systems of the DFKI has been supported by the German Federal Ministry for Education and Research over a period of three years. The application partners Daimler Trucks and Schaeffler Technologies have successfully tested it at five locations.

Complex networking in the production

The third demonstrator is a module from Bosch Rexroth which belongs to the Industrie 4.0 demonstrator of the SmartFactory-KL partner consortium. By means of open interfaces, horizontal and vertical networking is possible: for example, the continuous access of commissioning, operation and diagnostics by means of a smart device which integrates IT processes into production.