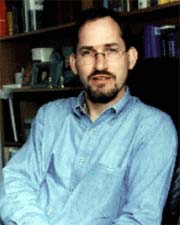 Carbon dioxide, an environmentally friendly solvent for dyeing and dry cleaning, may become a valuable new tool for making medical implants, according to a study at Ohio State University.

Engineers here used compressed carbon dioxide (CO2) to push chemicals into a plastic that is often used as a bone replacement. With further development, the technology could be used in a wide range of plastics that release medicines — from antibiotics to anti-tumor agents -– into the body.

The high-pressure, high-temperature CO2 is neither gas nor liquid, but is known as a “supercritical fluid,” explained David Tomasko, associate professor of chemical engineering at Ohio State. Supercritical fluids are often used in industry because they penetrate materials like a gas but can dissolve some substances — such as grease — and other chemicals like a liquid.

“Though supercritical CO2 has long been developed as a means of extracting molecules, this work shows that it can be used in the opposite way,” said David Tomasko, associate professor of chemical engineering at Ohio State.

The study also revealed that engineers can control the pressure of the CO2 to alter the internal structure of the plastic and create voids that may enable the material to hold larger quantities of medicine than might normally be possible.

Tomasko and John Lannutti, associate professor of materials science and engineering, their graduate students Taryn Sproule and Hongbo Li, and undergraduate student J. Alex Lee, published their results in a recent issue of the Journal of Supercritical Fluids.

Supercritical CO2 is gaining popularity as an environmentally friendly dry-cleaning agent and textile-dyeing solvent, but it is the fluid’s ability to sterilize surfaces that could prove key for making medically active implants. Currently, implants are sterilized with heat, radiation, or chemicals that can make embedded medicines less effective, Tomasko explained.

The engineers’ early tests with a protein solution suggest that supercritical CO2 may leave medicines intact.

They applied a coating of the protein solution onto dime-sized plastic disks with a cotton swab, and placed the disks in a glass tank, which they then filled with supercritical CO2. The proteins contained a fluorescent biomarker, so the researchers were able to track how well the proteins penetrated the plastic by examining cross-sections of the material under a microscope in ultraviolet light.

The microscope showed that the proteins survived the embedding process, and formed a layer 30 micrometers, or millionths of a meter, beneath the surface of the plastic.

Although the plastic — polymethylmethacrylate, or PMMA — was undamaged by the procedure, the interior of the disks foamed up into a Swiss cheese-like texture, with voids opening inside. The faster the engineers turned off the high-pressure CO2, the foamier the material became. Lowering the pressure slowly had the opposite effect.

Tomasko envisions that such voids within an implant could come in handy for holding extra quantities of a drug for long-term therapy.

Today, medical implants are used for mechanical support where tissue or bone has been removed. The researchers’ vision is to “piggyback” drug delivery onto this mechanical function. The implant may be impregnated with drugs to prevent inflammation or infection following surgery. Or, in cases where a patient has had bone surgically removed as part of a treatment for cancer, doctors may also need to dispense anti-tumor agents from the implant for a longer period, Tomasko explained.

He’s been working with David Powell, clinical assistant professor of otolaryngology, to investigate the potential use of such implants for patients who’ve had facial surgery.

Since completing their initial study, the engineers have begun using a porous glass disk to dispense protein solution onto the PMMA, instead of a cotton swab. Still, they found that the proteins don’t penetrate the PMMA evenly, but form clumps instead — an effect Tomasko suspects is due to the tightly packed polymer chains that make up the plastic.

“We think the CO2 lubricates the polymer chains so the protein molecules can slip in-between,” he said.

For the next step in this research, the engineers will be working with biodegradable plastics and determine whether the medicine remains effective after being embedded with the supercritical fluid.

Douglas Kniss, professor of obstetrics and gynecology at Ohio State, provided the protein solution, and Kathy Wolken, senior electron microscopist at the Campus Microscopy and Imaging Facility, assisted with the imaging of the PMMA samples.

This work was sponsored by the American Chemical Society’s Petroleum Research Fund and the National Science Foundation, along with internal support from Ohio State. The Wright Laboratory’s Materials Directorate at Wright-Patterson Air Force Base provided access to some of the equipment used in the study.