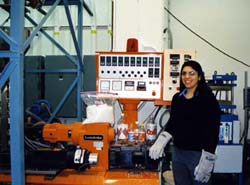 Plastics are everywhere these days, but current recycling techniques allow only a very limited portion to be reclaimed after initial use. Researchers in the Department of Chemical Engineering at North Carolina State University, working to change that, have developed a unique recycling process for some of the most common kinds of polymers.

“We’re trying to develop a process where we can take waste polymer and convert it back into the material from which it was made. In the process, all the impurities are removed from the polymer,” said Roberts. “Ideally, this should be done in a single step because the economics have to make sense for the process to have widespread applicability.”

The process, according to Roberts, has two unique elements. “First we run the process in a machine called a twin-screw extruder, which has high throughput. A lot of polymer can be processed in a very short time,” he said. “The extruder melts the PET and creates very thin films so we can interface the high molecular weight polymer with another material, either ethylene
glycol or methanol, that will reduce the molecular weight of the polymer substantially.”

Second, supercritical carbon dioxide (CO2) is combined with the ethylene glycol or methanol, which reduces the viscosity, or stickiness, of the polymer, making it easier to process and allowing better contact between the materials. At the end of the process, the CO2 is vented from the extruder and run through a condenser, where dissolved impurities can be removed. The CO2 is then recycled.

The process has several advantages. The conversion is done under efficient processing conditions and is a one-step, environmentally benign procedure. In addition, the process can be tailor-made for materials of different molecular weights.

A single-screw extruder has been used successfully in the research laboratory at NC State for this procedure. Now Roberts and his team are looking for ways to make this process economically feasible for an industrial-scale operation. “The basic reaction of ethylene glycol with the polymer is known, but our preliminary data say that this enhanced reaction is several orders of magnitude faster when done in the extruder with supercritical CO2 than if it is run conventionally,” said Roberts.“That translates into lower cost.”

According to Khan, twin-screw extruders are common in the workplace, so these machines can be reconfigured to use supercritical CO2. First, the research team must determine how variables – including rate of flow of polymer; the amounts of CO2, ethylene glycol or methanol; temperature; pressure of CO2; and machine configuration – affect the processing.

“To our knowledge, the machines in the marketplace have never been used for this purpose, but they can be modified for this process,” said Roberts. “Part of our research involves configuring the existing machines so they can give optimal performance.”