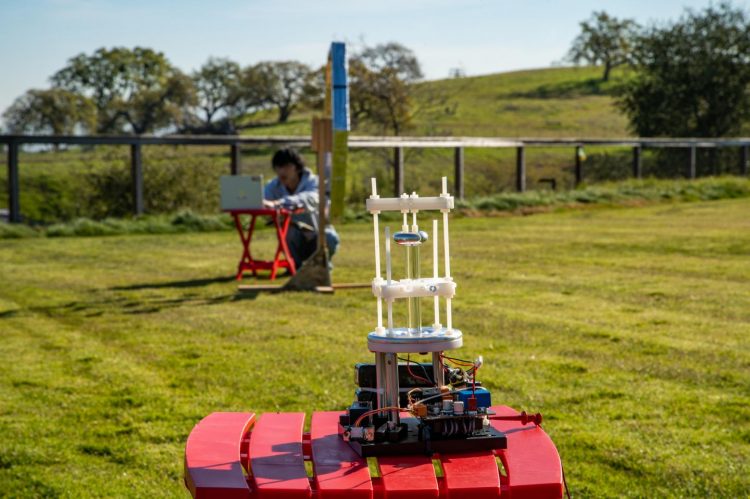 A new type of pocket-sized antenna, developed at the Department of Energy's SLAC National Accelerator Laboratory, could enable mobile communication in situations where conventional radios don't work, such as under water, through the ground and over very long distances through air.

The device emits very low frequency (VLF) radiation with wavelengths of tens to hundreds of miles. These waves travel long distances beyond the horizon and can penetrate environments that would block radio waves with shorter wavelengths. While today's most powerful VLF technology requires gigantic emitters, this antenna is only four inches tall, so it could potentially be used for tasks that demand high mobility, including rescue and defense missions.

The SLAC-led team reported their results today in Nature Communications.

In modern telecommunications, radio waves transport information through air for radio broadcasts, radar and navigation systems and other applications. But shorter-wavelength radio waves have their limits: The signal they transmit becomes weak over very long distances, can't travel through water and is easily blocked by layers of rock.

In contrast, the longer wavelength of VLF radiation allows it to travel hundreds of feet through ground and water and thousands of miles beyond the horizon through air.

However, VLF technology also comes with major challenges. An antenna is most efficient when its size is comparable to the wavelength it emits; VLF's long wavelength requires enormous antenna arrays that stretch for miles. Smaller VLF transmitters are much less efficient and can weigh hundreds of pounds, limiting their intended use as mobile devices. Another challenge is the low bandwidth of VLF communication, which limits the amount of data it can transmit.

The new antenna was designed with these issues in mind. Its compact size could make it possible to build transmitters that weigh only a few pounds. In tests that sent signals from the transmitter to a receiver 100 feet away, the researchers demonstrated that their device produced VLF radiation 300 times more efficiently than previous compact antennas and transmitted data with almost 100 times greater bandwidth.

“There are many exciting potential applications for the technology,” Kemp said. “Our device is optimized for long-range communication through air, and our research is looking at the fundamental science behind the method to find ways to further enhance its capabilities.”

To generate VLF radiation, the device exploits what is known as the piezoelectric effect, which converts mechanical stress to a buildup of electrical charge.

The researchers used a rod-shaped crystal of a piezoelectric material, lithium niobate, as their antenna. When they applied an oscillating electric voltage to the rod it vibrated, alternately shrinking and expanding, and this mechanical stress triggered an oscillating electric current whose electromagnetic energy then got emitted as VLF radiation.

The electric current stems from electric charges moving up and down the rod. In conventional antennas, these motions are close to the same size as the wavelength of the radiation they produce, and more compact designs typically require tuning units larger than the antenna itself. The new approach, on the other hand, “allows us to efficiently excite electromagnetic waves with wavelengths that are much larger than the motions along the crystal and without large tuners, which is why this antenna is so compact,” Kemp said.

The researchers also found a clever way of tweaking the wavelength of the emitted radiation, he said: “We repeatedly switch the wavelength during operation, which allows us to transmit with a large bandwidth. This is key to achieving data transfer rates of more than 100 bits per second – enough to send a simple text.”

This work was done in collaboration with SRI International and Gooch and Housego, a photonics technology firm. The project is part of the AMEBA effort, funded by the Defense Advanced Research Projects Agency (DARPA). The research team has a pending patent for their technology, filed through Stanford University.

SLAC National Accelerator Laboratory is supported by the Office of Science of the U.S. Department of Energy. The Office of Science is the single largest supporter of basic research in the physical sciences in the United States, and is working to address some of the most pressing challenges of our time. For more information, please visit science.energy.gov.