EcoSwing Superconducting Generator Proves Itself on the Test Bench 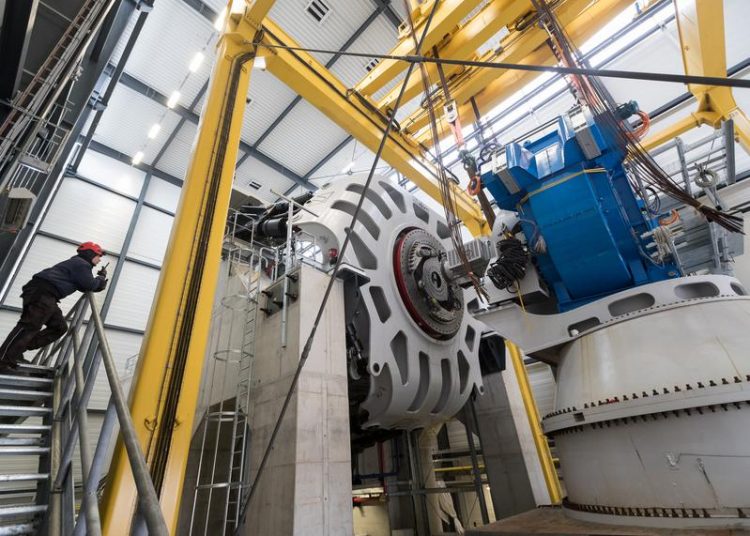 The compact generator is attached to DyNaLab´s Stewart Platform in order to apply loads from the rotor site dynamically. Fraunhofer IWES, Jan Meier

Sometimes less really is more: 40 per cent less weight and smaller dimensions than a comparable permanent magnet synchronous generator – these EcoSwing features are only possible thanks to superconductivity.

With this solution just a fraction of the magnetically active material is required to outperform the power density of conventional generators. Since superconductors have practically no electrical resistance, the size of the conductor cross-section can be drastically reduced. This is a highly promising property for the development of future turbine generations.

“As world first, we stepped up in applying superconducting technology with the ambitious project EcoSwing. In order to reduce uncertainties, new technology needs testing under realistic conditions. The DyNaLab provided the opportunity to test under definable conditions and gain reliable results,” says Jesper Hansen, Senior Project Manager at Envision Energy.

This places particular requirements on the test bench: The generator has to be cooled down to 30 K (that is about -240 °C) using a closed-cycle gas cooling. While this was the first time that such a cooling system has been operated at Fraunhofer IWES, it got confirmed that this type of cooling performed very reliably.

Within the framework of EcoSwing, Fraunhofer IWES designed the mechanical adaptations for connecting to the test bench and, in doing so, developed and integrated a highly accurate measurement system for recording the enormous torques:

“Due to the special drive train concept, the generator is subject to virtually no parasitic loads when in use in the turbine, thus this situation also had to be ensured on the test bench. To achieve this, the generator was installed and adjusted with highest levels of precision,” said Hans Kyling, IWES project leader for EcoSwing, explaining this unique challenge.

At the same time, a further prerequisite was also all-important: The generator had to be fixed in such a way as to allow evasive action when subject to a nominal load. The specific adaptation prevented constraining forces from acting on the test object and influencing the test data.

The test results are confirmation of the successful validation and excellent functionality of the system. The project partners are now looking forward to the field campaign with a 3.6 MW test turbine from Envision in Denmark. The generator with a diameter of just 4 m will be transported there by ship.

The project runs until end of Feb. 2019. The next step, focusing on commercial wind applications, is already being planned by the project partners.