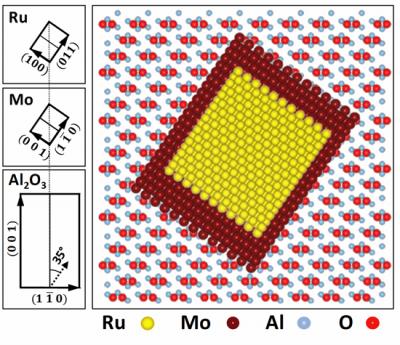 A new experimental discovery, led by researchers at the University of Minnesota, demonstrates that the chemical element ruthenium (Ru) is the fourth single element to have unique magnetic properties at room temperature. The discovery could be used to improve sensors, devices in the computer memory and logic industry, or other devices using magnetic materials.

The use of ferromagnetism, or the basic mechanism by which certain materials (such as iron) form permanent magnets or are attracted to magnets, reaches back as far as ancient times when lodestone was used for navigation. Since then only three elements on the periodic table have been found to be ferromagnetic at room temperature–iron (Fe), cobalt (Co), and nickel (Ni). The rare earth element gadolinium (Gd) nearly misses by only 8 degrees Celsius.

Magnetic materials are very important in industry and modern technology and have been used for fundamental studies and in many everyday applications such as sensors, electric motors, generators, hard disk media, and most recently spintronic memories.

As thin film growth has improved over the past few decades, so has the ability to control the structure of crystal lattices–or even force structures that are impossible in nature. This new study demonstrates that Ru can be the fourth single element ferromagnetic material by using ultra-thin films to force the ferromagnetic phase.

The details of their work are published in the most recent issue of Nature Communications. The lead author of the paper is a recent University of Minnesota Ph.D. graduate Patrick Quarterman, who is a National Research Council (NRC) postdoctoral fellow at the National Institute of Standards and Technology (NIST).

“Magnetism is always amazing. It proves itself again. We are excited and grateful to be the first group to experimentally demonstrate and add the fourth ferromagnetic element at room temperature to the periodic table,” said University of Minnesota Robert F. Hartmann professor of electrical and computer engineering Jian-Ping Wang, the corresponding author for the paper and Quarterman's advisor.

“This is an exciting but hard problem. It took us about two years to find a right way to grow this material and validate it. This work will trigger magnetic research community to look into fundamental aspects of magnetism for many well-known elements,” Wang added.

Other members of the team also stressed the importance of this work.

“The ability to manipulate and characterize matter at the atomic scale is the cornerstone of modern information technology,” said study co-author Paul Voyles, a Beckwith-Bascom Professor and Chair of the Department of Materials Science and Engineering at the University of Wisconsin-Madison. “Our collaboration with University of Minnesota Professor Wang's group shows that these tools can find new things even in the simplest systems, consisting of a just a single element.”

Industry partners agree that collaboration is key to innovation

“Intel is pleased with the long-term research collaboration it has with the University of Minnesota and C-SPIN [Center for Spintronic Materials, Interfaces, and Novel Architectures], said Ian A. Young, Senior Fellow and Director at Intel Corporation. “We are excited to share these developments enabled by exploring the behavior of quantum effects in materials, which may provide insights for innovative energy efficient logic and memory devices.” Other industry leaders agree that this discovery will have an impact on the semiconductor industry.

“Spintronic devices are of rapidly increasing importance to the semiconductor industry,” said Todd Younkin, the director of Defense Advanced Research Projects Agency (DARPA)-sponsored consortia at Semiconductor Research Corporation (SRC). “Fundamental advances in our understanding of magnetic materials, such as those demonstrated in this study by Professor Wang and his team, is critical to realizing continued breakthroughs in computing performance and efficiency.”

Magnetic recording is still the dominant player in data storage technology, but magnetic based random-access memory and computing is beginning to take its place. These magnetic memories and logic devices put additional constraints on the magnetic materials, where data is stored and computed, compared to traditional hard disk media magnetic materials. This push for novel materials has led to renewed interest in attempts to realize predictions which show that under the right conditions, non-ferromagnetic materials, such as Ru, palladium (Pd) and osmium (Os) can become ferromagnetic.

The researchers said this study opens the door to fundamental studies of this new ferromagnetic Ru. From an application perspective, Ru is interesting because it is resistant to oxidation, and additional theoretical predictions claim it has a high thermal stability–a vital requirement for scaling magnetic memories. Examination of this high thermal stability is the focus of ongoing research at the University of Minnesota.

To read the full paper entitled “Demonstration of Ru as the 4th ferromagnetic element at room temperature,” by Quarterman et al, visit the Nature Communications website.