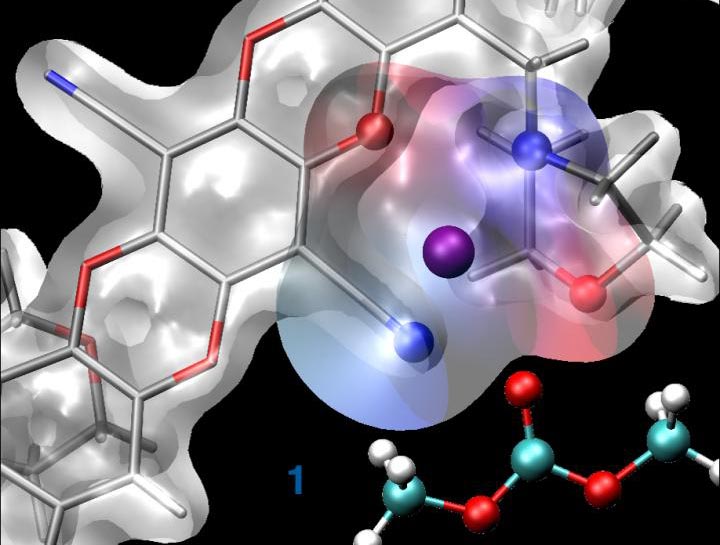 By binding specific ions in specially designed cages within its pores, a new membrane could enable more efficient flows in energy storage devices.

Membranes that allow certain molecules to quickly pass through while blocking others are key enablers for energy technologies from batteries and fuel cells to resource refinement and water purification. For example, membranes in a battery separating the two terminals help to prevent short circuits, while also allowing the transport of charged particles, or ions, needed to maintain the flow of electricity.

The most selective membranes – those with very specific criteria for what may pass through – suffer from low permeability for the working ion in the battery, which limits the battery’s power and energy efficiency. To overcome trade-offs between membrane selectivity and permeability, researchers are developing ways to increase the solubility and mobility of ions within the membrane, therefore allowing a higher number of them to transit through the membrane more rapidly. Doing so could improve the performance of batteries and other energy technologies.

Now, as reported today in the journal Nature, researchers have designed a polymer membrane with molecular cages built into its pores that hold positively charged ions from a lithium salt. These cages, called “solvation cages,” comprise molecules that together act as a solvent surrounding each lithium ion – much like how water molecules surround each positively charged sodium ion in the familiar process of table salt dissolving in liquid water. The team, led by researchers at the U.S. Department of Energy’s Lawrence Berkeley National Laboratory (Berkeley Lab), found that solvation cages increased the flow of lithium ions through the membrane by an order of magnitude compared to standard membranes. The membrane could allow high-voltage battery cells to operate at higher power and more efficiently, important factors for both electric vehicles and aircraft.

“While it’s been possible to configure a membrane’s pores at very small length scales, it’s not been possible until now to design sites to bind specific ions or molecules from complex mixtures and enable their diffusion in the membrane both selectively and at a high rate,” said Brett Helms, a principal investigator in the Joint Center for Energy Storage Research (JCESR) and staff scientist in Berkeley Lab’s Molecular Foundry, who led the work.

The research is supported by JCESR, a DOE Energy Innovation Hub whose mission is to deliver transformational new concepts and materials for electrodes, electrolytes, and interfaces that will enable a diversity of high-performance next-generation batteries for transportation and the grid. In particular, JCESR provided the motivation to understand how ions are solvated in porous polymer membranes used in energy storage devices, Helms said.

To pinpoint a design for a cage in a membrane that would solvate lithium ions, Helms and his team looked to a widely practiced drug discovery process. In drug discovery, it’s common to build and screen large libraries of small molecules with diverse structures to pinpoint one that binds to a biological molecule of interest. Reversing that approach, the team hypothesized that by building and screening large libraries of membranes with diverse pore structures, it would be possible to identify a cage to temporarily hold lithium ions. Conceptually, the solvation cages in the membranes are analogous to the biological binding site targeted by small molecule drugs.

Helms’ team devised a simple but effective strategy for introducing functional and structural diversity across multiple length scales in the polymer membranes. These strategies included designs for cages with different solvation strengths for lithium ions, as well as arrangements of cages in an interconnected network of pores. “Before our work, a diversity-oriented approach to the design of porous membranes had not been undertaken,” said Helms.

Using these strategies, Miranda Baran, a graduate student researcher in Helms’ research group and a Ph.D. student in the Department of Chemistry at UC Berkeley and lead author on the paper, systematically prepared a large library of possible membranes at the Molecular Foundry. She and co-authors experimentally screened each one to determine a leading candidate whose specific shape and architecture made its pores best suited for selectively capturing and transporting lithium ions. Then, working with Kee Sung Han and Karl Mueller at the Environmental Molecular Sciences Laboratory, a DOE user facility at Pacific Northwest National Laboratory, Baran and Helms revealed, using advanced nuclear magnetic resonance techniques, how lithium ions flow within the polymer membrane compared to other ions in the battery.

To further understand the molecular reasons for the new membrane’s behavior, the researchers collaborated with Artem Baskin, a postdoctoral researcher working with David Prendergast, another investigator in JCESR. They performed calculations, using computing resources at Berkeley Lab’s National Energy Research Scientific Computing Center (NERSC), to determine the precise nature of the solvation effect that occurs as lithium ions associate with the cages in the membrane’s pores. This solvation effect causes lithium ions to concentrate more in the new membrane than they do in standard membranes without solvation cages.

Finally, the researchers investigated how the membrane performed in an actual battery, and determined the ease with which lithium ions are accommodated or released at a lithium metal electrode during the battery’s charge and discharge. Using X-ray tools at Berkeley Lab’s Advanced Light Source, they observed lithium flow through a modified battery cell whose electrodes were separated by the new membrane. The X-ray images showed that, in contrast to batteries that used standard membranes, lithium was deposited smoothly and uniformly at the electrode, indicating that the battery charged and discharged quickly and efficiently thanks to the solvation cages in the membrane.

With their diversity-oriented approach to screening possible membranes, the researchers achieved the goal of creating a material that helps to transport ions rapidly without sacrificing selectivity. Parts of the work – including component analysis, gas sorption, and X-ray scattering measurements – were also supported by the Center for Gas Separations Relevant to Clean Energy Technologies, a DOE Energy Frontier Research Center led by UC Berkeley.

Future work by the Berkeley Lab team will expand the library of membranes and screen it for enhanced transport properties for other ions and molecules of interest in clean energy technologies. “We also see exciting opportunities to combine diversity-oriented synthesis with digital workflows for accelerated discovery of advanced membranes through autonomous experimentation,” said Helms.

The researchers also received support from the DOE Office of Science and the Advanced Research Projects Agency-Energy’s (ARPA-E’s) IONICS program.

Founded in 1931 on the belief that the biggest scientific challenges are best addressed by teams, Lawrence Berkeley National Laboratory (http://www.lbl.gov/) and its scientists have been recognized with 14 Nobel Prizes. Today, Berkeley Lab researchers develop sustainable energy and environmental solutions, create useful new materials, advance the frontiers of computing, and probe the mysteries of life, matter, and the universe. Scientists from around the world rely on the Lab’s facilities for their own discovery science. Berkeley Lab is a multiprogram national laboratory, managed by the University of California for the U.S. Department of Energy’s Office of Science.