Ultraviolet Light to the Extreme 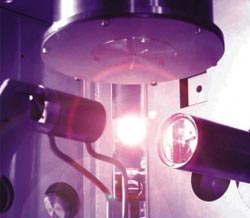 ETH-Zurich/B.Newton<br><br>Plasma generated by blasting droplets with a laser 6000 times a second <br>

When you heat a tiny droplet of liquid tin with a laser, plasma forms on the surface of the droplet and produces extreme ultraviolet (EUV) light, which has a higher frequency and greater energy than normal ultraviolet.

Now, for the first time, researchers have mapped this EUV emission and developed a theoretical model that explains how the emission depends on the three-dimensional shape of the plasma. In doing so, they found a previously untapped source of EUV light, which could be useful for various applications including semiconductor lithography, the process used to make integrated circuits.

In the experiments, Andrea Giovannini and Reza Abhari from ETH-Zurich in Switzerland blasted a 30-micron-diameter droplet of tin with a high-powered laser 6,000 times a second. They measured the spatial distribution of the resulting EUV emission and found that 30 percent of it came from behind the region of the droplet that was struck by the laser. According to their model, this unexpected distribution was due to the fact that the plasma partially surrounding the droplet was elongated in the direction of the laser pulse.

Devices that produce narrow beams of EUV for purposes like in semiconductor lithography use mirrors to focus the emission. But, until now, no one knew to collect the EUV light radiating from behind the droplet.

Thanks to this work, Giovannini said, future devices can exploit this previously unknown source of EUV emission. The new experiments can also inform the development of EUV devices by showing where mirrors should be placed around a droplet in order to collect and focus as much EUV light as possible.

The researchers describe their experiments in the Journal of Applied Physics, which is produced by AIP Publishing.