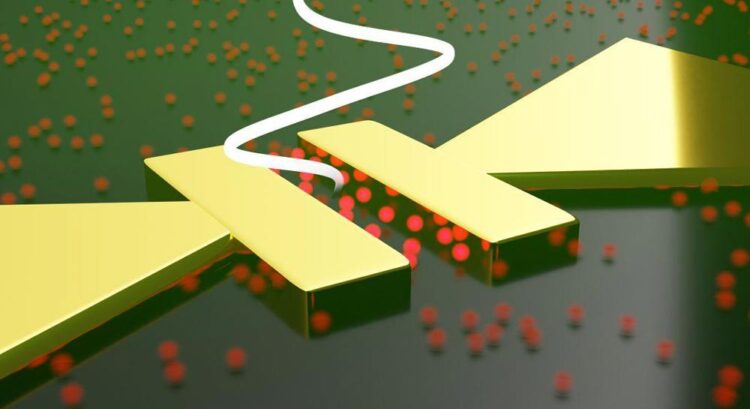 From Heinrich Hertz to Terahertz:

Today, high-tech applications in optoelectronics work with ultrafast electrical oscillations, reaching frequencies up to the terahertz range. A team from the Universities of Bayreuth and Melbourne has now succeeded in developing a microscope that records videos of these oscillations. The glow of semiconductor nanocrystals makes visible the previously hidden electric fields that drive ultrafast electrical components. The researchers present their discovery in the journal Light: Science & Applications. The microscope could be used to observe the driving fields of nanocircuits in operation.

The human eye detects the intensity of light, but does not register the underlying electric fields. It was not until 1886 that Heinrich Hertz was able to prove their existence by making atoms glow through electromagnetic waves. However, the temporal waveforms, which are widely used today in fast electrical circuits, remained hidden from the eye. Scientists at the Universities of Bayreuth and Melbourne are now making them visible in a microscope for the first time. For this purpose, they use semiconductor nanocrystals consisting of few thousand atoms, which are referred to as quantum dots in research. The crucial factor here is the fluorescence of the quantum dots: They are deposited on a surface structured in the micrometer range and form a coating that reacts sensitively to electric fields – in such a way that the fluorescence signals of the quantum dots change. In the microscope, samples of the coated surface are now excited by terahertz electric fields and scanned immediately afterwards with femtosecond laser flashes. The resolution is extremely high: a single oscillation of the electric field with a frequency of one trillion Hertz can be registered in this way and converted into an optical signal. One trillion hertz corresponds to one terahertz (1 THz).

With the new microscope, the team in Bayreuth and Melbourne has succeeded in recording a video of the electric fields inside a terahertz antenna – a so-called bowtie resonator. These antennas are at the heart of THz radio links and enable broadband amplification of ultrafast signals. At the University of Bayreuth, they are being further developed in collaboration with the research group of Prof Dr Markus Retsch (Physical Chemistry). “We image the field distributions in this terahertz antenna far below the diffraction limit, namely with the resolution of a hundredth of the THz wavelength. In principle, our method allows for even a much higher resolution. It can be significantly refined by highest resolution fluorescence microscopy. With this goal in mind, we will continue to work closely with the Australian research group led by Prof. Dr. Paul Mulvaney,” says the Bayreuth doctoral student and first author of the study, Moritz Heindl M.Sc.

With regard to future technological applications, the new “field microscope” is particularly interesting because it is now possible to track the excitation and propagation of highly localized THz wave packets on complex surface structures. “This opens up new possibilities for accelerating future microelectronics. Linear and nonlinear effects in tailored semiconductor material systems can be used to specifically shape microscopic fields and process signals in an ultrafast fashion,” says the study’s leader, Prof. Dr. Georg Herink, Junior Professor of Ultrafast Dynamics at the University of Bayreuth.