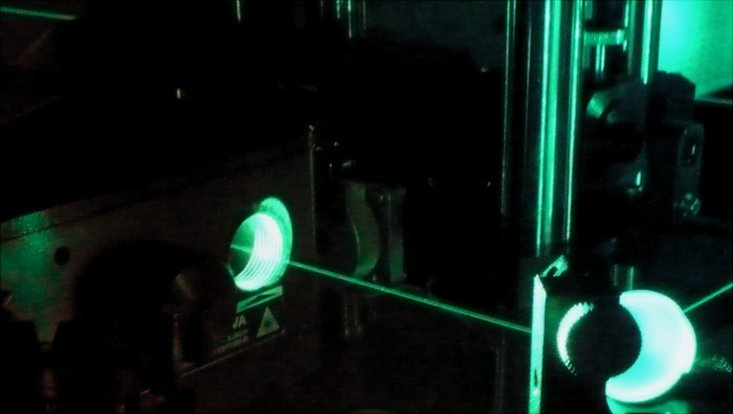 More than a century ago, Albert Einstein published his theoretical work on the photo-effect, which fundamentally describes the photoionization of matter, or the process of dissolving electrons from atoms by using light. This discovery earned him a Nobel Prize in 1921.

However, it turns out that the process is very complicated in detail. Up until now it has been nigh impossible to carry out experimental measurements of the absolute ionization probability, e.g., the percentage of atoms ionized after light irradiation.

The teams of scientists led by Prof. Dr. Markus Drescher and Prof. Dr. Klaus Sengstock have uniquely combined expertise in ultracold atoms with phenomena of ultrafast physics, which has opened up a fundamentally new experimental approach.

Ultrashort laser pulses can be so intense that they rip atoms apart. This process is called strong-field ionization and the details depend on the energy and color of the laser light. Up until now, it was not always possible to know which ionization regime dominates. The scientists have now succeeded in observing this in detail by using ultracold atoms. As there is hardly any atomic motion after the ionization process, it is possible to accurately measure the regimes.

The scientists used laser light to cool rubidium atoms to ultracold temperatures of 100 nanokelvins, only slightly above absolute zero temperature of -273.15° Celsius. An intense ultrashort laser pulse illuminated parts of the cloud of rubidium atoms for a very short time of 215 femtoseconds (a femtosecond is one millionth of one billionth of a second) and ionized a fraction of the atoms. The remaining atomic density was imaged onto a camera so that the amount of ionized atoms could be accurately measured.

In particular, the scientists observed that the atomic bond in an optical light field is modified so fast that the atomic shell cannot follow the oscillation of the light field. During ionization the atom thus absorbs multiple light particles (photons) simultaneously.

“This leads to precise measurements of ultrafast processes by using ultracold atoms, because these systems can be controlled extremely well experimentally.” The results can also be used to help realize quantum computers based on ultracold ions. Such computers may solve certain problems faster than conventional ones.

Parallel to these experiments, an international collaboration with Prof. Nikolay Kabachnik (Moscow State University) and Prof. Andrey Kazansky (Ikerbasque, Spain) calculated the ionization process theoretically. The scientists modelled the quantum mechanical interaction between atom and laser field, with the following result: the theoretical predictions are in perfect agreement with the measured data.