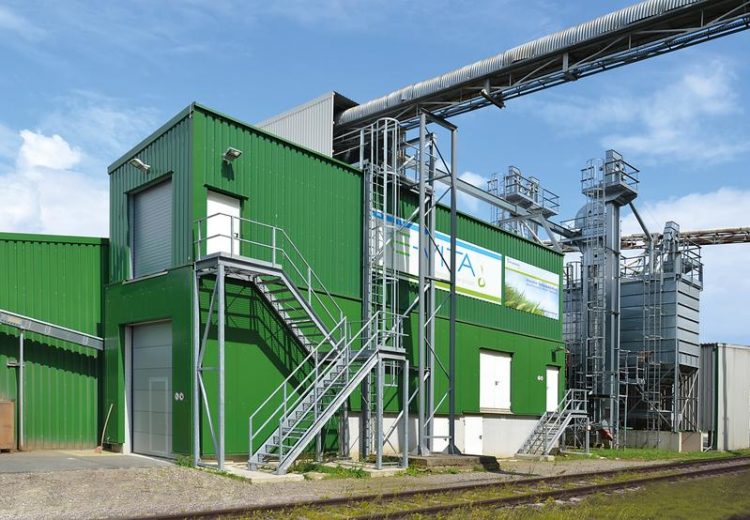 “The E-VITA technology is a successful and persuasive example of using physical processes in agriculture. It provides a convenient method that protects users and the environment – with no loss of effectiveness.” Andreas Prelwitz is firmly convinced of this.

Just the fact that electron-treated seed was sown on about one in five hectares of grain fields in the north German State of Mecklenburg-Western Pomerania for this year's harvest proves the high acceptance of the process.

Ceravis AG has been using environmentally- and user-friendly electron treatment of seed under the name E-VITA for years. The use of the E-VITA process in large agricultural areas is a success story that has gained attention and recognition far beyond the borders of Germany.

“The high demand for electron-treated seed prompted us to build another E-VITA plant in Güstrow for the autumn 2018 planting season. This new facility is also an investment in agriculture, which is increasingly suffering from the loss of chemical crop protection products.

Thanks to E-VITA, no negative impact on agriculture is therefore expected from seed treatment in the future, if even more chemical dressing compounds lose their approvals,” suggests Andreas Prelwitz, responsible for seed product development at Ceravis AG.

Up to now, E-VITA technology has been employed to dress seed for grains and legume seed. There is already initial actual experience with corn and canola. A research project is currently underway to investigate the possibility of employing the technique for feed grains (hay and fine legumes).

“Electron treatment of seed is the first physical process that has become widely established in agriculture. It is the result of more than 20 years of joint development with universities, independent testing facilities, seed producers, and farmers,” explains André Weidauer, deputy head of the Electron Beam Processes department at the Fraunhofer FEP.

There are numerous advantages to using electron treatment. The most important advantage is the ease of use and environmental friendliness that results from the elimination of pickling dusts. However, the process offers numerous additional advantages:

– No health risks for the user
– Purely physical process – no chemicals
– Biologically effective against seed-borne pathogens and reliable yields
– No hazardous substance requirements (safety regulations, environmental and user protection)
– No damage to beneficial organisms
– No chemical residues in the soil
– No development of resistance in the pathogens
– Faster field emergence
– Approved for organic farming
– Smoother flow in the seed drill
– Problem-free utilization of seed residues as animal feed
– Positive public image of agriculture

The new plant achieves the same output as the first: 25 metric tons per hour for cereal grain. The new plant concept, which is based on a standard container, is not only more compact than previous plant concepts. It can also be used as a mobile unit without special approval. In addition, plant operational availability was further increased by new components.

So far, only the Fraunhofer FEP has been able to provide suitably powerful technology for generating the required electrons. Ceravis is the first company in the world to use this technology for the decontamination (disinfection) of seed on an industrial scale. The same process principle is also used worldwide for disinfecting medical products and beverage packaging as a result of its high effectiveness.

Electron dressing does not produce any visible change to the treated seed. This means treatment is invisible to the farmer. However, extensive joint trial cultivation with farmers at numerous agricultural operations produced positive experience that ultimately contributed to confidence in this process.

The main argument from the chemical industry (the alleged lack of effectiveness against soil-borne pathogens) was refuted by numerous controlled tests at official testing stations (Federal Biological Research Centre for Agriculture and Forestry (BBA), Mecklenburg-Western Pomerania State Research Institute for Agriculture, Schleswig-Holstein Chamber of Agriculture, Humboldt-Universität zu Berlin, and Brandenburg State Office for Agriculture) and by many years of experience from agriculture.

The big breakthrough came in autumn 2011, when electron-treated seed showed better field emergence than chemically treated seeds in cases involving difficult seed quality and unfavorable tilling conditions. Since then, the demand for electron-treated seed has been growing continuously. This great success has led to worldwide interest in the technology. Numerous visitor groups (from Brazil to South Korea) have convinced themselves of the performance of the plant and the technology on site in Güstrow.

The high investment costs have hindered wider use of the process up to now. The planned introduction of a new electron source, which no longer requires glow emitters for electron emission, will significantly reduce plant costs. In the future, smaller seed companies will also be able to use the process. Moreover, the use of the process for other types of crops (feed and vegetable seed) will be carefully examined.

A major advantage of electron treatment is that it is also highly effective against viruses and bacteria that adhere to the seed. In order to further increase the safety of electron treatment, additional biological protection is currently being developed. With the selective application of bacteria that occur naturally in the soil and already live in symbiosis with various crops, many advantages can be transferred to the seed and thus to the seedling. The first results are promising.