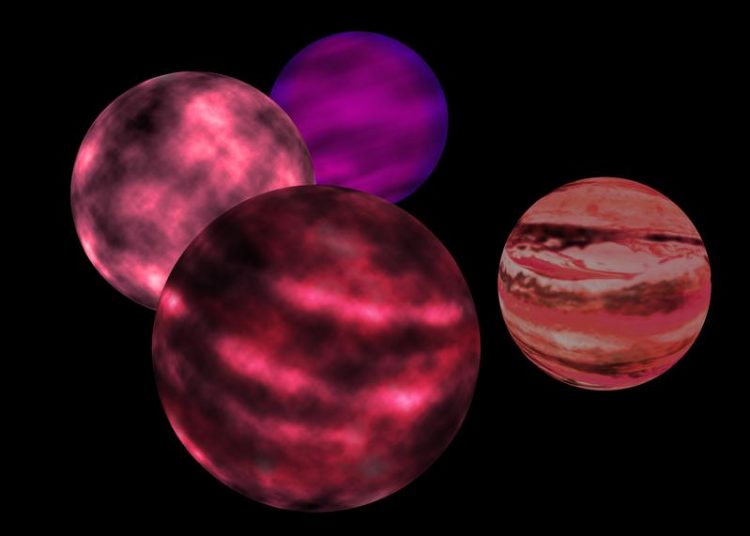 Possible manifestations of brown dwarfs. As brown dwarfs are nearly invisible in the optical light and only emit radiation in the IR regime, they assume different colors in that range. AIP/J. Fohlmeister

Brown dwarfs are objects that are too large to be called planets, yet too small to be stars. Having a mass of only less than seven per cent of the mass of the Sun, they are unable to create sufficient pressure and heat in their interiors to ignite hydrogen-to-helium fusion, a fundamental physical mechanism by which stars generate radiation. In this sense brown dwarf are “failed stars”.

It is therefore important to know how many brown dwarfs really exist in different regions of the sky in order to achieve a better understanding of star formation and of the motion of stars in the Milky Way.

Gabriel Bihain and Ralf-Dieter Scholz have taken a careful look at the distribution of nearby known brown dwarfs from a point of view that was not looked at before. To their surprise they discovered a significant asymmetry in the spatial configuration, strongly deviating from the known distribution of stars.

„I projected the nearby brown dwarfs onto the galactic plane and suddenly realized: half of the sky is practically empty! We absolutely didn’t expect this, as we have been looking at an environment that should be homogeneous.“, Gabriel Bihain explained. Seen from Earth, the empty region overlaps with a large part of the northern sky.

The scientists concluded that there should be many more brown dwarfs in the solar neighbourhood that are yet to be discovered and that will fill the observed gap. If they are right, this would mean that star formation fails significantly more often than previously thought, producing one brown dwarf for every four stars. In any case, it appears, the established picture of the solar neighbourhood and of its brown dwarf population will have to be rethought.

„It is quite possible that not only brown dwarfs are still hiding in the observational data, but also other objects with even smaller, planetary-like masses. So it is definitely worth it to take another deep look at both existing and future data.”, Ralf-Dieter Scholz concluded.

Scientific publication: G. Bihain and R.-D. Scholz, A non-uniform distribution of the nearest brown dwarfs, Astronomy and Astrophysics, 589, A26 (2016).

The key topics of the Leibniz Institute for Astrophysics Potsdam (AIP) are cosmic magnetic fields and extragalactic astrophysics. A considerable part of the institute's efforts aim at the development of research technology in the fields of spectroscopy, robotic telescopes, and e-science. The AIP is the successor of the Berlin Observatory founded in 1700 and of the Astrophysical Observatory of Potsdam founded in 1874. The latter was the world's first observatory to emphasize explicitly the research area of astrophysics. Since 1992 the AIP is a member of the Leibniz Association.