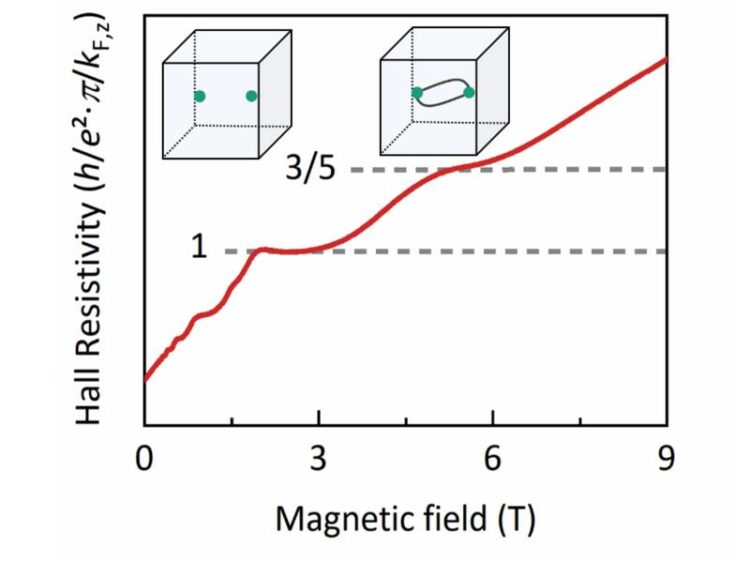 Hall resistivity as a function of magnetic field at 2 K in units of the Planck constant h, the elementary charge e and the Fermi wavevector along the magnetic field kF,z.
© MPI CPfS

Scientists at the Max Planck Institute for Chemical Physics of Solids and their international colleagues found signatures of an unconventional Hall response in the quantum limit of the bulk metal HfTe5, adjacent to the three-dimensional quantum Hall effect of a single electron band at low magnetic ﬁelds.

Traditionally, the quantum Hall effect has exclusive been associated with two-dimensional metals. Now, scientists at the Max Planck Institute for Chemical Physics of Solids in Dresden, the Technische Universität Dresden, the Brookhaven National Laboratory at New York, the Helmholtz-Zentrum Dresden-Rossendorf, the University of the Chinese Academy of Sciences, and the Wuerzburg-Dresden Cluster of Excellence ct.qmat have discovered a new strongly correlated electronic state in a three-dimensional metal that is a close relative of the two-dimensional quantum Hall state.

The team found signatures of an unconventional Hall response in the quantum limit of the bulk metal HfTe5, adjacent to the three-dimensional quantum Hall effect of a single electron band at low magnetic ﬁelds. The additional plateau-like feature in the Hall conductivity of the lowest Landau level is accompanied by a Shubnikov-de Haas minimum in the longitudinal electrical resistivity and its magnitude relates as 3/5 to the height of the last plateau of the three-dimensional quantum Hall effect. The ﬁndings are consistent with strong electron-electron interactions stabilizing an unconventional variant of the Hall effect in a three-dimensional material in the quantum limit.

Given that topological states of matter have been of utmost importance in our understanding of two-dimensional systems, these new findings promise exciting future insights. Examining the novel properties of quantum Hall physics in three-dimensional metals could not only allow scientists to better understand how far the mysterious realm of quantum Hall physics spreads, but also drive research on strongly correlated topological states in three-dimensional materials in general.