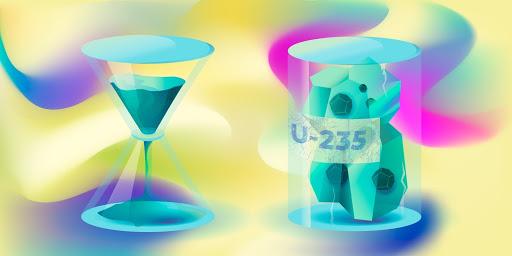 Why does nuclear fuel 'age'?

During the reactor operation, fission fragments, flying at high speeds through the crystal lattice of the nuclear fuel material, create various defects — vacancies, interstitial atoms, and their clusters.

Combining, such vacancies form bubbles that fill up with fission gas products during fuel burnout. The diffusion of such nanobubbles significantly affects the properties of the fuel and the release of gaseous fission products from it.

Modeling to the rescue

Therefore, integrated models are currently being developed to allow calculating the evolution of fuel material properties during the burnout process. The nanobubble diffusion coefficient is one of the key parameters in such models. This study is a joint project of MIPT and the Joint Institute for High Temperatures of the Russian Academy of Sciences.

From Schrödinger equation to dynamics of hundreds of thousands of atoms

The researchers from the Laboratory of Supercomputer Methods in Condensed Matter Physics at MIPT examined atomistic models of the material comprising hundreds of thousands of atoms. Using supercomputers, the team calculated their trajectories over hundreds of millions or even billions of integration steps.

The gamma uranium interatomic interaction model used was obtained by the physicists in the course of their previous work, based on resolving the quantum mechanical problem for a multielectron system.

MIPT doctoral student Alexander Antropov, a co-author of the paper, explained: “For the nanobubble to move, it is necessary for the lattice atoms to cross over to the other side of the bubble. This is similar to an air bubble moving in water.

However, in solid materials, this process is much slower. When working on the project, we demonstrated that there is another difference: The pores in the lattice take the form of polyhedra and the stable faces inhibit the diffusion process. In the 1970s, the possibility of such an effect was predicted theoretically based on general considerations. Our method makes it possible to obtain quantitative results for a specific material.”

“Due to the fact that the diffusion of nanobubbles is very slow, the only real way to model their movement is to somehow give them a push. The problem, however, is how do you push a void? While working on the project, we proposed and established a method, in which an external force acts on the material surrounding the nanopore.

The bubble begins to float upwards, similarly to a bubble in water under the buoyant force of Archimedes' principle. The proposed method is based on the Einstein-Smoluchowski relation and makes diffusion coefficient calculations dozens of times faster.

In the future, we plan to use it for other materials that are exposed to severe radiation damage in nuclear reactors,” commented Vladimir Stegailov, MIPT professor, the head of the MIPT Laboratory of Supercomputer Methods in Condensed Matter Physics.