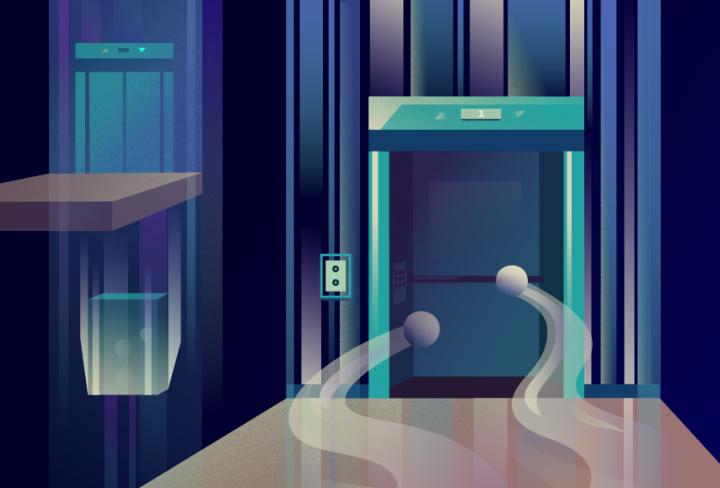 This is a molecular elevator. Credit: Daria Sokol/MIPT Press Office

They confirmed that the transport mechanism resembles that of an elevator: A “door” opens, ions and substrate molecules come in, the door closes, and they travel through the membrane.

Presumably the mammalian transporters operate the same way, so this discovery is potentially important for developing new treatments for schizophrenia and other mental illnesses caused by malfunctioning of these transporters. The research was published in the journal Nature Communications.

Nerve impulses travel through the human body in the form of chemical signals or electric charges, as ion currents. Neurons, the cells of the nervous system, can generate and propagate electrical signals. A neuron consists of a cell body with projections of two types: multiple dendrites and a single axon.

The cell body and the dendrites serve as an antenna picking up signals from other neurons. By summing and processing all of the input signals, the neuron generates its own impulses that are then passed on to the neighboring neuron.

The electric impulse in an axon is similar to the electric current in wires, but it is carried by sodium and calcium ions, rather than electrons. That said, electrical signal transmission is only possible within a neuron. The signals transmitted between neurons are of a chemical nature and involve special structures, called synapses.

Another hidden yet vital stage in this process is that the neurotransmitter molecules must be removed from the synaptic cleft to enable the next pulse transmission. Otherwise, the receiving neuron will be overstimulated.

Neurotransmitters are cleared out by dedicated transporters that pump these molecules from the synaptic cleft back into the cell body. These transporters are located either in the synapses of neurons or in the so-called glial cells, which provide support and protection for neurons (fig. 1).

Glutamate is the main excitatory neurotransmitter in the human brain. When glutamate is released into the synaptic cleft, this excites the next neuron in the sequence. The human nervous system also has inhibitory neurotransmitters, for example GABA (gamma-Aminobutyric acid), which snuff out any potential in the neuron when released.

The glutamate transporter clears out glutamate from the synaptic cleft. This process is crucial to the functioning of the human brain. The inhibition of glutamate removal from the cleft is linked to many neurodegenerative diseases and mental disorders, including schizophrenia.

Quite often we can learn a lot about someone by just looking at their relatives. The same holds true for evolutionary similar proteins, called homologues. The group of Russian and Dutch scientists has resolved a conformational ensemble of the aspartate transporter from archaea, which is homologous to the glutamate transporters in humans.

Until recently, X-ray crystallography was the main technique for studying the 3D structures of proteins. The main challenge faced by that method is crystallizing proteins to obtain diffraction images from crystals. Membrane proteins tend not to form well-diffracting crystals easily.

To overcome this bottleneck, another technique called cryo-electron microscopy can be used. In cryo-EM a vitrified sample is irradiated by an electron beam and the collected images are combined, yielding a three-dimensional reconstruction of the protein. The obtained model is analyzed and can be used to design new drugs.

The structure of the mammalian glutamate transporter homologue was determined using a cryo-electron microscope at the University of Groningen in the Netherlands.

These proteins consist of three individual molecules, hence they form trimers. Each individual protomer consists of two parts: the immobile part fixed in the membrane and the mobile transport domain resembling an elevator. The study has revealed 15 protomer structures (in five trimers), including intermediate conformations. The team also confirmed independent movements of transport domains.

“These structures help us explain how these proteins prevent sodium leakage,” the head of the MIPT Laboratory of Structural Electron Microscopy of Biological Systems, Albert Guskov explained. “Just like in an elevator, the transport domain has a door, and as long as it stays open, the elevator will not move. But once the sodium ions and the substrate — in this case, the aspartate molecules — enter the elevator, the door closes, and off it goes. So, if there are only sodium ions present, this is not enough to close the door.”

“This makes the transport very efficient, which is particularly important in the case of human proteins, since it's not merely about eating up the aspartate — like in archaea — but about information transfer between neurons,” the scientist added.

The Laboratory of Structural Electron Microscopy of Biological Systems, led by Professor Guskov, is establishing a modern scientific infrastructure at MIPT, enabling the full-cycle research on single-particle cryo-EM in Russia. In 2019, the team launched a research platform based on the cryo-electron microscope FEI Polara G2 with further plans to upgrade it to the state-of-the-art microscope.

“The competences of the laboratory are in high demand in the Russian scientific community, and the expanding international academic network enables the access to modern scientific infrastructure. Such infrastructure opens new opportunities for studying the fundamental questions of biology, such as the mechanisms of functions of ion channels and transporters, interactions within protein complexes, etc. It also helps us find industrial partners that would conduct research toward applying our findings in drug design and elsewhere in medicine,” Professor Guskov commented.