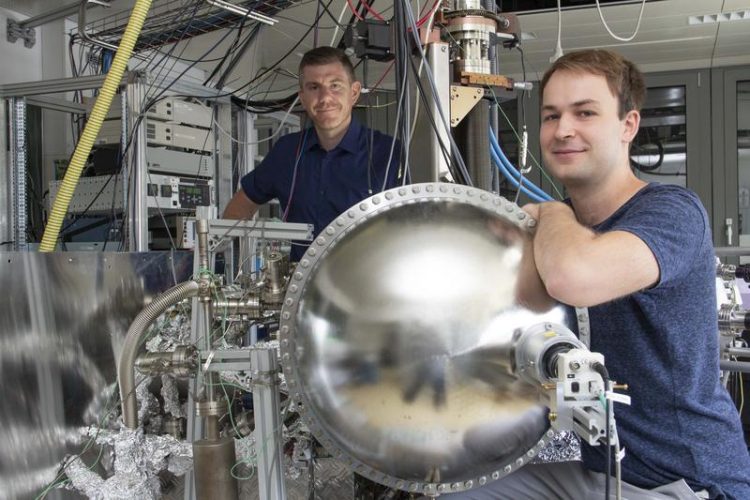 They make our cars more environmentally friendly and they are indispensable for the chemical industry: catalysts make certain chemical reactions possible – such as the conversion of CO into CO2 in car exhaust gases – that would otherwise happen very slowly or not at all.

Surface physicists at the TU Wien have now achieved an important breakthrough; metal atoms can be placed on a metal oxide surface so that they show exactly the desired chemical behavior. Promising results with iridium atoms have just been published in the renowned journal “Angewandte Chemie”.

Smaller and smaller – all the way down to the single atom

For car exhaust gases, solid catalysts such as platinum are used. The gas comes into contact with the metal surface, where it reacts with other gas components. “Only the outermost layer of metal atoms can play a role in this process. The gas can never reach the atoms inside the metal so they are basically wasted,” says Prof. Gareth Parkinson from the Institute of Applied Physics at TU Wien.

It therefore makes sense to construct the catalyst not as a single large block of metal, but in the form of fine granules. This makes the number of active atoms as high as possible. Since many important catalyst materials (such as platinum, gold or palladium) are very expensive, cost is a major issue.

For years, efforts have been made to turn the catalysts into finer and finer particles. In the best case scenario, the catalyst could be made up of individual catalyst atoms, and all would be active in just the right way. This is easier said than done, however. “When metal atoms are deposited on a metal oxide surface, they usually have a very strong tendency to clump together and form nanoparticles,” explained Gareth Parkinson.

Instead of attaching the active metal atoms to a surface, it is also possible to incorporate them into a molecule with cleverly selected neighboring atoms. The molecules and reactants are then dissolved into a liquid, and the chemical reactions happen there.

Both variants have advantages and disadvantages. Solid metal catalysts have a higher throughput, and can be run in continuous operation. With liquid catalysts, on the other hand, it is easier to tailor the molecules as required, but the product and the catalyst have to be separated again afterwards.

The best of both worlds

Parkinson's team at TU Wien has is working to combine the advantages of both variants: “For years we have been working on processing metal oxide surfaces in a controlled manner and imaging them under the microscope,” says Gareth Parkinson. “Thanks to this experience, we are now one of a few laboratories in the world that can incorporate metal atoms into a solid surface in a well defined way.”

In much the same way as liquid catalyst molecules are designed, it is becoming possible to choose the neighbouring atoms in the surface that would be the most favourable from a chemical point of view – and special surface-physics tricks make it possible to incorporate them into a solid matrix on a special iron oxide surface. This can be used, for example, to convert carbon monoxide into carbon dioxide.

“Single atom catalysis is a new, extremely promising field of research,” says Gareth Parkinson. “There have already been exciting measurements with such catalysts, but so far it was not really known why they worked so well. Now, for the first time, we have full control over the atomic properties of the surface and can clearly prove this by means of images from the electron microscope”.

This research was funded by the Austrian Science Fund START prize, awarded to Gareth Parkinson in 2015.
Original Publication: