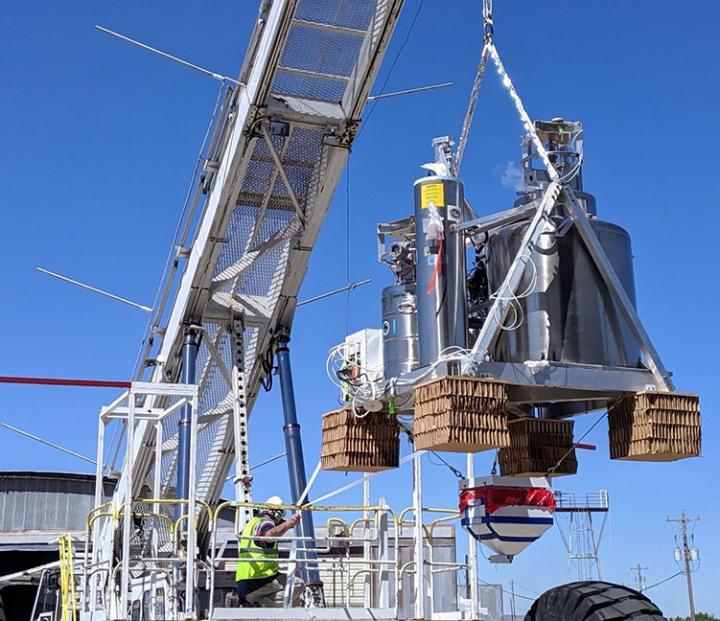 The BOBCAT payload hangs from the launch vehicle during testing prior to launching from Fort Sumner, New Mexico, in August 2019.
Credit: Nick Bellis

How do you cool a large telescope to absolute zero while flying it from a huge balloon at 130,000 feet?

Nearly all photons emitted after the Big Bang are now visible only at far-infrared wavelengths. This includes light from the cold universe of gas and dust from which stars and planets form, as well as faint signals from distant galaxies tracing the universe’s evolution to today.

Earth’s atmosphere blocks most of this light, and space missions are an ideal but prohibitively expensive way to explore it. So scientists are turning to huge stratospheric balloons — the size of an entire football stadium — because they are a tiny fraction of the cost.

In Review of Scientific Instruments, from AIP Publishing, Alan J. Kogut, of NASA’s Goddard Space Flight Center, and colleagues found a way to solve a widely recognized limitation of stratospheric balloon payloads, which fly at altitudes of 130,000 feet above 99% of the atmosphere.

It may sound simple in theory, but it is quite difficult to cool a telescope the size of a living room to nearly absolute zero while flying it from a balloon.

“Liquid helium can easily cool the telescope, but keeping it cold means putting the entire telescope into a giant thermos bottle called a dewar,” he said. “A thermos bottle the size of a living room would weigh several tons — more than even the largest balloons can carry.”

This is where the Balloon-Borne Cryogenic Telescope Testbed (BOBCAT) comes in.

“BOBCAT develops technology for ultralight dewars to reduce their weight enough to allow really big ones to fly on a balloon,” said Kogut.

Dewars have an inner cup holding the cold liquid, surrounded by an outer shell. The gap between them has no air within it, a vacuum, to prevent air from carrying heat from the outside world into the cold interior.

A dewar is heavy, because its walls need to hold a vacuum against sea-level air pressure. But a dewar meant to work on a balloon does not need to work at sea level. It must work at 130,000 feet above sea level, where there is almost no air pressure.

The scientists designed a dewar with extremely thin walls, not much thicker than a soda can’s, which can launch at room temperature. It has a valve, so the vacuum gap between the inner cup and outer wall vents during ascent to let air out.

“Once the balloon reaches 130,000 feet, the valve closes to create a proper vacuum space, and it cools the telescope by pumping liquid nitrogen or liquid helium into the dewar from separate storage tanks,” Kogut said. “The storage tanks are small and don’t weigh much. Now, we have a cold telescope above the atmosphere, able to see faint images from the cold or distant universe.”

The first flight was a success, and the next step is to re-fly the payload carrying an ultralight dewar.