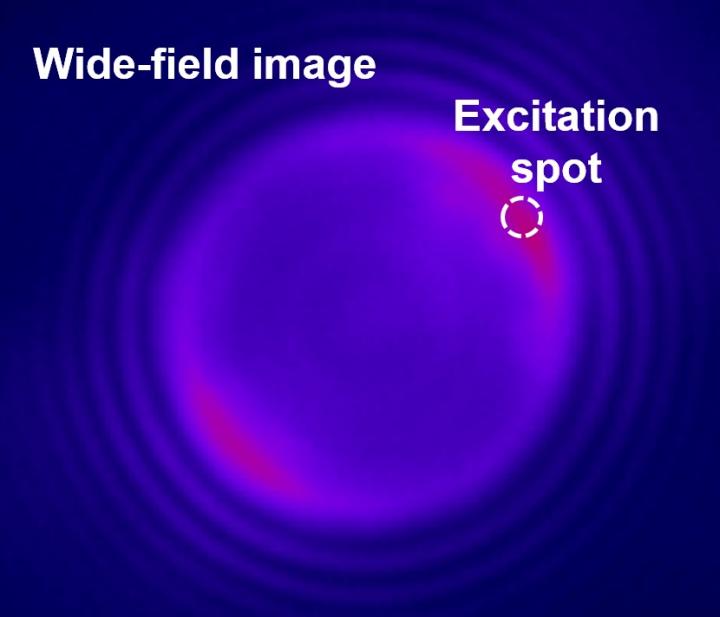 A single nanoparticle can act like a laser at low power but still emit a sharp signal.

Lasers are used in a range of everyday devices, harnessing the power of light molecules, photons, – lined up to form highly concentrated beams of light – to perform now common tasks such as scanning barcodes and removing tattoos.

As biosensing and bio-imaging research seeks to look deep inside tissue to the intracellular level miniaturising laser devices poses significant challenges for these nanoscale biological applications. In new research, published in Nature Communications, scientists demonstrate how the earlier promising concept of a microcavity laser can produce an energy-saving and user-safe laser emissions requiring low pump power.

Corresponding author Dr Jiajia Zhou, from the University of Technology Sydney (UTS), said that normally low pump power is insufficient to make nanoparticles to lase but the team was able to “control the luminescent emitters within every single nanoparticle to interact with each other so that the electrons can accumulate at specific energy levels”.

“This means that even at a very low power pump the nanoparticles will lase, in fact we demonstrated a two-order of magnitude lower pumping threshold compared to what is usually achieved,” she said.

The research team also had to engineer the binding surface of the nanoparticle matrix to form a cavity surface with a uniform single layer.

Dr Zhou said that potentially the Near Infra Red (NIR) microcavity laser can be embedded in thick tissues, single cells, and to sense the environmental indicators such as temperature, pH, and refractive index.

“Monitoring the change of these indicators can tell us the health status of the tissues or cells, which sits in the scope of early-stage disease detection, “she said.

”I think this is definitely a step forward to realising the dream that just as we use a laser pointer on a powerpoint slide, we could point a tiny device inside a cell, and illuminate an area of interest inside the compartments of a cell.

“Lowering the requirement for the pump power means less tissue damage as the laser penetrates the sample. Also, in this case the laser emission is as sharp as a line, it can sense the indicators more accurately by avoiding the undesired interference which frequently happens in spontaneous fluorescence-based sensing,” he said.

“It’s not science fiction. We’ve demonstrated a single nanoparticle, which is smaller than an intracellular compartment, can act like a laser, and at low power but it can still emit a sharp signal. In otherwords a ‘laser pointer’ small enough to get inside a cancer cell, and illuminate to stop the engine of that cancer cell,” Professor Jin, who is also the director of UTS-SUStech Joint Research Centre, said.