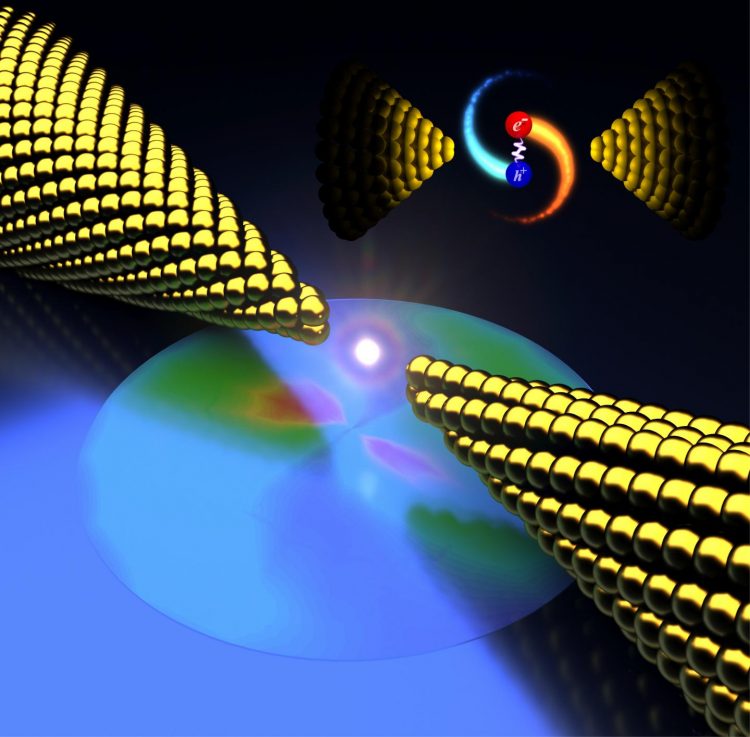 Rice University physicists discover that plasmonic metals can be prompted to produce "hot carriers" that in turn emit unexpectedly bright light in nanoscale gaps between electrodes. The phenomenon could be useful for photocatalysis, quantum optics and optoelectronics. Credit: Illustration by Longji Cui and Yunxuan Zhu/Rice University

Seeing light emerge from a nanoscale experiment didn't come as a big surprise to Rice University physicists. But it got their attention when that light was 10,000 times brighter than they expected.

Condensed matter physicist Doug Natelson and his colleagues at Rice and the University of Colorado Boulder discovered this massive emission from a nanoscale gap between two electrodes made of plasmonic materials, particularly gold.

The lab had found a few years ago that excited electrons leaping the gap, a phenomenon known as tunneling, created a larger voltage than if there were no gap in the metallic platforms.

In the new study in the American Chemical Society journal Nano Letters, when these hot electrons were created by electrons driven to tunnel between gold electrodes, their recombination with holes emitted bright light, and the greater the input voltage, the brighter the light.

The study led by Natelson and lead authors Longji Cui and Yunxuan Zhu appears in the American Chemical Society journal Nano Letters and should be of interest to those who research optoelectronics, quantum optics and photocatalysis.

The effect depends upon the metal's plasmons, ripples of energy that flow across its surface. “People have explored the idea that the plasmons are important for the electrically driven light emission spectrum, but not generating these hot carriers in the first place,” Natelson said. “Now we know plasmons are playing multiple roles in this process.”

The researchers formed several metals into microscopic, bow tie-shaped electrodes with nanogaps, a test bed developed by the lab that lets them perform simultaneous electron transport and optical spectroscopy. Gold was the best performer among electrodes they tried, including compounds with plasmon-damping chromium and palladium chosen to help define the plasmons' part in the phenomenon.

“If the plasmons' only role is to help couple the light out, then the difference between working with gold and something like palladium might be a factor of 20 or 50,” Natelson said. “The fact that it's a factor of 10,000 tells you that something different is going on.”

The reason appears to be that plasmons decay “almost immediately” into hot electrons and holes, he said. “That continuous churning, using current to kick the material into generating more electrons and holes, gives us this steady-state hot distribution of carriers, and we've been able to maintain it for minutes at a time,” Natelson said.

Through the spectrum of the emitted light, the researchers' measurements revealed those hot carriers are really hot, reaching temperatures above 3,000 degrees Fahrenheit while the electrodes stay relatively cool, even with a modest input of about 1 volt.

Natelson said the discovery could be useful in the advance of optoelectronics and quantum optics, the study of light-matter interactions at vanishingly small scales. “And on the chemistry side, this idea that you can have very hot carriers is exciting,” he said. “It implies that you may get certain chemical processes to run faster than usual.

The J. Evans Attwell Welch Fellowship, Rice's Smalley-Curl Institute, the Robert A. Welch Foundation, the University of Colorado, the National Science Foundation and the Air Force Office of Scientific Research supported the research.

This news release can be found online at https://news.rice.edu/2020/06/29/rice-labs-bright-idea-is-pure-gold/

Department of Physics and Astronomy: https://physics.rice.edu

Rice University physicists discover that plasmonic metals can be prompted to produce “hot carriers” that in turn emit unexpectedly bright light in nanoscale gaps between electrodes. The phenomenon could be useful for photocatalysis, quantum optics and optoelectronics. (Credit: Illustration by Longji Cui and Yunxuan Zhu/Rice University)

At top, an illustration shows the experimental setup developed at Rice University to study the effect of how current prompts localized surface plasmons (LSPs) to produce hot carriers in the nanogap between two electrodes. Center, a photo shows a light-emitting tunnel junction between two gold electrodes with input from 1 to 1.2 volts. At bottom, a spectrographic plot shows the photon energy and intensity produced at the junction. (Credit: Natelson Research Group/Rice University)