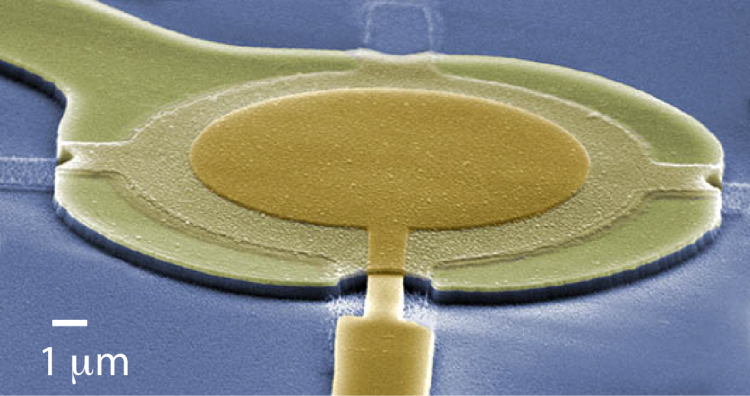 Micro drums enable a nearly noiseless measurement of radio signals. The drum is made of thin superconducting aluminium film on top of a quartz chip (blue background). Image by Mika Sillanpää

Researchers at Aalto University and the University of Jyväskylä have developed a new method of measuring microwave signals extremely accurately. This method can be used for processing quantum information, for example by efficiently transforming signals from microwave circuits to the optical regime.

If you are trying to tune in a radio station but the tower is too far away, the signal gets distorted by noise. The noise results mostly from having to amplify the information carried by the signal in order to transfer it into an audible form. According to the laws of quantum mechanics, all amplifiers add noise. In the early 1980s, US physicist Carlton Caves proved theoretically that the Heisenberg uncertainty principle for such signals requires that at least half an energy quantum of noise must be added to the signal. In everyday life, this kind of noise does not matter, but researchers around the world have aimed to create amplifiers that would come close to Caves’ limit.

‘The quantum limit of amplifiers is essential for measuring delicate quantum signals, such as those generated in quantum computing or quantum mechanical measuring, because the added noise limits the size of signals that can be measured’, explains Professor Mika Sillanpää.

From quantum bits to flying qubits

So far, the solution for getting closest to the limit is an amplifier based on superconducting tunnel junctions developed in the 1980s, but this technology has its problems. Led by Sillanpää, the researchers from Aalto and the University of Jyväskylä combined a nanomechanical resonator – a vibrating nanodrum – with two superconducting circuits, i.e. cavities.

‘As a result, we have made the most accurate microwave measurement with nanodrums so far’, explains Caspar Ockeloen-Korppi from Aalto University, who conducted the actual measurement.

In addition to the microwave measurement, this device enables transforming quantum information from one frequency to another while simultaneously amplifying it.

‘This would for example allow transferring information from superconducting quantum bits to the “flying qubits” in the visible light range and back’, envision the creators of the theory for the device, Tero Heikkilä, Professor at the University of Jyväskylä, and Academy Research Fellow Francesco Massel. Therefore, the method has potential for data encryption based on quantum mechanics, i.e. quantum cryptography, as well as other applications.

The research team also included researchers Juha-Matti Pirkkalainen and Erno Darmskägg from Aalto University. The work was published in Physical Review X, one of the most distinguished journals in physics, 28 October 2016. The work was conducted in the Center of Excellence on Low Temperature Quantum Phenomena and Devices in the Academy of Finland, and it was partially funded by the European Research Council.