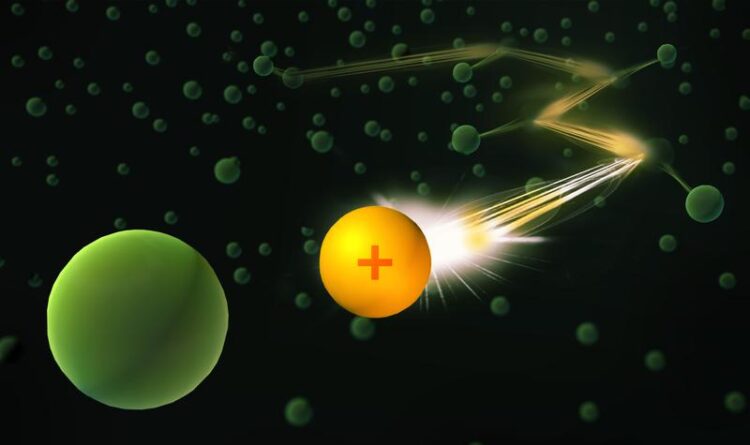 Artistical visualization of the trajectory of a positively charged ion (yellow) through the BEC (green)
Celina Brandes / University of Stuttgart, Physics 5

Transport processes are ubiquitous in nature but still raise many questions. The research team around Florian Meinert from the 5th Institute of Physics at the University of Stuttgart has now developed a new method that allows them to observe a single charged particle on its path through a dense cloud of ultracold atoms. The results were published in the prestigious journal Physical Review Letters and are subject in a Viewpoint of the accompanying popular science journal Physics.

Meinert‘s team uses a so called Bose Einstein condensate (BEC) for their experiments. This exotic state of matter consists of a dense cloud of ultracold atoms. By means of sophisticated laser excitation, the researchers create a single Rydberg atom within the gas. In this giant atom the electron is a thousand times further away from the nucleus than in the ground state and thus only very weakly bound to the core.

„This new approach allows us to measure the mobility of a single ion in a Bose Einstein condensate for the very first time“ Thomas Dieterle, PhD student on the experiment, is pleased. The researchers’ next goal is to observe collisions between a single ion and atoms at even lower temperatures, where quantum mechanics instead of classical mechanics dictates the processes. „In future, our newly created model system – the transport of a single ion – will allow for a better understanding of more complex transport processes that are relevant in many-body systems, e.g. in certain solids or in superconductors“ Meinert is sure. These measurements are also an important step on the way to investigate exotic quasi-particles, so-called polarons, which can arise through interaction between atoms and ions.

The work was created in the Center for Integrated Quantum Science and Technology IQST, a consortium of the universities of Stuttgart and Ulm and the Max Planck Institute for Solid State Research in Stuttgart. The aim of the center is to promote synergies between physics and related natural and engineering sciences and to represent quantum science from the basics to technological applications. Researchers and practitioners from the fields of physics, chemistry, biology, mathematics, and engineering science at IQST investigate the world of quanta in its entirety and in some cases cooperate directly with the industry.