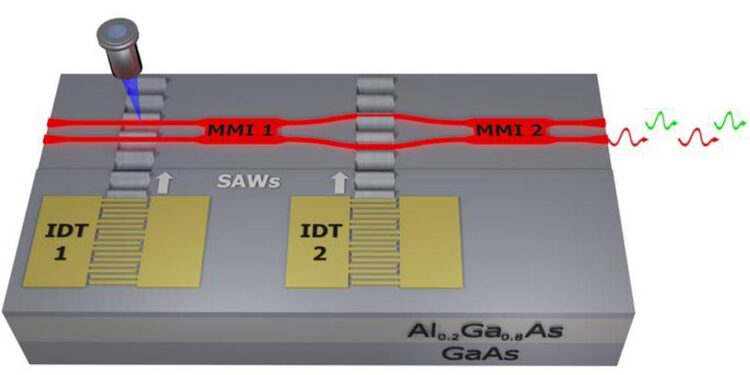 A team of German and Spanish researchers headed by Prof. Hubert Krenner from the Institute of Physics at Münster University has succeeded in using a soundwave to switch individual photons on a chip back and forth between two outputs at gigahertz frequencies.

A team of German and Spanish researchers from Valencia, Münster, Augsburg, Berlin and Munich have succeeded in controlling individual light quanta to an extremely high degree of precision. In the “Nature Communications” journal, the researchers report how, by means of a soundwave, they switch individual photons on a chip back and forth between two outputs at gigahertz frequencies. This method, demonstrated here for the first time, can now be used for acoustic quantum technologies or complex integrated photonic networks.

Light waves and soundwaves form the technological backbone of modern communications. While glass fibres with laser light form the World Wide Web, nanoscale soundwaves on chips process signals at gigahertz frequencies for wireless transmission between smartphones, tablets or laptops. One of the most pressing questions for the future is how these technologies can be extended to quantum systems, to build up secure (i.e. tap-free) quantum communication networks.

“Light quanta or photons play a very central role in the development of quantum technologies,” says physicist Prof. Hubert Krenner, who heads the study in Münster and Augsburg. “Our team has now succeeded in generating individual photons on a chip the size of a thumbnail and then controlling them with unprecedented precision, precisely clocked by means of soundwaves,” he says. Dr. Mauricio de Lima, who researches at the University of Valencia and coordinates the work being done there, adds, “The functional principle of our chip was known to us as regards conventional laser light, but now, using light quanta, we have succeeded in making the long wished-for breakthrough towards quantum technologies.”

In their study, the researchers fabricated a chip which is equipped with minute ‘conducting paths’ for light quanta – so-called waveguides. These are approximately 30 times thinner than a human hair. In addition, this chip contained quantum light sources, so-called quantum dots. Dr. Matthias Weiß from the University of Münster carried out the optical experiments and adds: “These quantum dots, just a few nanometres in size, are islands inside the waveguides which emit light as individual photons. The quantum dots are included in our chip and so we don’t have to use complicated methods to generate individual photons by means of another source.” Dr. Dominik Bühler, who designed the quantum chips as part of his PhD at the University of Valencia, points out how fast the technology is: “By using nanoscale soundwaves, we are able to directly switch the photons on the chip back and forth between two outputs at unprecedented speed during their propagation in the waveguides.”

The researchers consider their results to be a milestone on the way towards hybrid quantum technologies as they combine three different quantum systems: quantum light sources in the form of quantum dots, the light quanta created, and phonons (the quantum particles in the soundwave). The hybrid quantum chips – designed at the University of Valencia and manufactured at the Paul Drude Institute of Solid-State Electronics using quantum dots produced at the Technical University of Munich – exceeded the expectations which the research team had.

The international team has taken a further decisive step towards acoustic quantum technologies. “We are already working flat out to enhance our chip so that we can programme the quantum state of the photons as we wish, or even control several photons with different colours between four or more outputs,” says Dr. Mauricio de Lima, with a view to the future. Prof. Hubert Krenner adds, “We benefit here from a unique strength which our nanoscale soundwaves have: as these waves propagate virtually loss-free on the surface of the chip, we can neatly control almost as many waveguides as we want with just one single wave – and to an extremely high degree of precision.”

A focused laserbeam (left, blue) generates single photos by a single quantum dot inside the photonic waveguides (red), which are fabricated on top of crystalline gallium arsenide- (GaAs-) aluminium gallium arsenide (Al0.2Ga0.8As).Two interdigitating electrodes (interdigital transducers, IDT) generate nanoscale soundwaves (surface acoustic waves, SAWs), which dynamically strain the waveguides. The nanoscale soundwave generated by the left IDT switches the color of the emitted single photons. The two waveguides are coupled by two so-called multimode interference beamsplitters (MMIs). The soundwave generated by the right IDT sorts the single photons according to their colour (red and green) between the two outputs on the right.