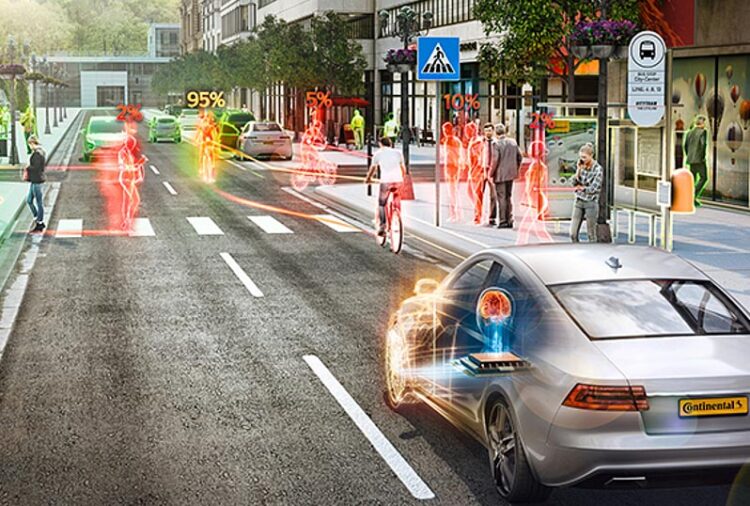 Important contribution from Cognitive Neuroinformatics at the University of Bremen: AI will use algorithms to interpret relevant objects in inner-city traffic.
© Continental

The automotive industry is working intensively on autonomous driving – a demanding and multifaceted challenge.

The Cognitive Neuroinformatics working group at the University of Bremen, headed by Professor Kerstin Schill, has contributed important research findings to the development of advanced driver assistance systems as part of a cooperation project with automotive supplier Continental. With the help of artificial intelligence, complex traffic situations can now be more easily identified.

PRORETA 5 is the name of the research project that the automotive supplier recently completed with its scientific cooperation partners. In addition to the University of Bremen, TU Darmstadt and Technical University of Iasi (TUIASI) in Romania were also involved. “At the end of the project, there was a driving demonstration in Darmstadt. There, we presented autonomous driving functions that we had been working on intensively,” says Professor Kerstin Schill, head of the Cognitive Neuroinformatics working group at the University of Bremen. “The research vehicle was able to autonomously follow the course of the road to a predefined destination and react to other road users – pedestrians, cyclists, and other vehicles. As part of a simulated sensor failure that resulted in an object not being detected, the vehicle also applied emergency braking.”

The aim of the PRORETA research project was to develop algorithms. These algorithms should be able to use sensor data to make correct driving decisions that are comparable to those of humans. At an uncontrolled intersection, for example, interpreting all the objects relevant to the planned direction of travel is challenging. It is a matter of their direction of movement, intention, and priority in traffic. Artificial intelligence (AI) should be able to make safe decisions without human intervention. “The big advantage of AI is that, after a training phase, it is able to draw the right conclusions even in unfamiliar situations,” explains the computer science professor. “One part of the project involved observing human drivers as they reduced and evaluated the complexity of their environment. The adaptive algorithms are now being trained according to similar principles.”

As part of the project, the Cognitive Neuroinformatics working group investigated AI methods for environmental perception: objects and obstacles in the environment should be identified. In addition, new methods of human attention modelling based on camera data were developed. Here, saliency maps are created that identify relevant areas of the image where, for example, other road users or signs appear. New mathematical models were also developed that represent the position, orientation, speed, or size of other road users mathematically correctly and describe complex vehicle geometries.

In a final step, object tracking was implemented that is able to detect other road users in the monitored area and estimate their state over time. “These methods ensure that the corresponding tasks can be solved more efficiently, robustly, and safely. They therefore make an important contribution to highly automated and autonomous driving,” says Kerstin Schill. “The project is an ideal example of how productive cooperation between university and business research can work. Projects such as PRORETA will strengthen Germany as a business location in both respects.”

The research contributions of the working group in detail:

• Jaime Maldonado focused on human attention modeling in the context of autonomous driving. In particular, an attention-grabbing pipeline consisting of two components was developed. On the one hand, relevant areas in camera images are determined using saliency maps. On the other hand, the driver’s gaze is projected into the image to expand the relevant area. This makes it possible to differentiate between relevant and nonrelevant regions in the image and process them more efficiently using subsequent algorithms.

• Andreas Serov implemented an object tracking system that detects relevant objects in the monitoring area of the vehicle and determines position, speed, orientation, and size in real time. A list of tracked objects is made available to the subsequent modules (prediction, planning, and control) for further processing. Object tracking is based on radar and lidar data. The state of each object is estimated with a probabilistic filter in which the state is processed on a manifold.

• Lino Giefer studied the theoretical principles of state estimation and representation in autonomous driving. In particular, he developed new models to describe articulated vehicles – such as buses, trams, and vehicles with trailers – in a mathematically correct way. He also investigated state and measurement uncertainties for localization and object tracking.

• Razieh Khamseh-Ashari investigated multimodal object detection based on lidar and camera data using AI methods. The fusion of sensor inputs early on achieves a highly precise localization of objects in the monitored area.

The project PRORETA was named after the eponymous crew member of Roman warships. The proreta stood guard in the bow of the ship (prora) and warned of shallow waters and other dangers ahead.