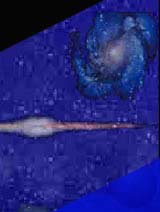 Cosmologists claim Universe has been forming and reforming for eternity.

The Universe was not born in one Big Bang, it has been going through cycles of creation and annihilation for eternity, according to a controversial new mathematical model1.

It’s a compelling claim. The new cyclic model removes a major stumbling block common to existing theories of the Universe – namely, that physics can’t explain what came before the Big Bang.

Because the model relies on new mathematics, it is having some teething problems, admit its proposers. Indeed, most cosmologists are treating the hypothesis with interested scepticism. Some are vociferously critical.

Steinhardt and Turok draw on the emerging science of string theory. This mathematical idea uses up to ten dimensions – instead of the usual four – to explain the weird behaviour of tiny things in physics called fundamental particles.

When applied to big things like cosmology, string theory invokes weird mathematical entities called membranes – branes for short. In the cyclic model there are two branes at any one time, one containing our Universe, the other a parallel Universe that is the mirror image of our own.

The researchers suggest that these branes regularly collide, as they did 15 billion years ago, resulting in the massive release of energy previously ascribed to the Big Bang. And just like the Big Bang, “this collision made all the radiation and matter that fills the Universe,” says Turok.

The branes are then flung apart. The Universes on each brane expand outwards over billions of years, as ours is doing today.

According to the model, a fifth dimension that we can’t see or travel through bridges the branes. As each Universe expands, its matter and energy spreads ever thinner and is diluted. When the spring-like fifth dimension overcomes this expansion energy it heaves the branes back together, they collide, and the whole process repeats. “It’s just like reproduction in biology,” says Turok.

As well as solving the problem of what came before the Big Bang, the cyclic model could explain numerous other cosmological conundrums, such as dark energy. Our Universe should contain more energy than can be measured, and there are no good theories to explain why. Turok and Steinhardt’s model suggests that this is because energy, in the form of gravity, leaks across the fifth dimension between our Universe and its complementary braneworld.

Steinhardt and Turok’s idea sounds appealing, but fellow astrophysicists are not greeting it with open arms. “The community is very, very sceptical,” says David Lyth, a cosmologist at the University of Lancaster, UK.

Others are more scathing. “It’s a very bad idea popular only among journalists,” says one of the chief critics of the cyclic model, Andrei Linde of Stanford University, California. “It’s an extremely complicated theory and simply does not work,” adds Linde, the originator of a rival model of the Universe.

String theory is still in its infancy, and applying it to cosmology stretches it to its limits, explains Cambridge University cosmologist George Efstathiou. “Its connection to fundamental physics is really rather weak,” he says, so until string theory matures, models that use it will be flawed and misunderstood. But on the whole, he says, “the cyclic model is a cute idea and some elements of it may survive.”

Steinhardt and Turok agree that problems with the mathematics could be their undoing. “There may be disasters waiting for us at higher levels of calculation,” says Turok. But, if it does add up, their theory overturns many ideas about the Universe, they say – like time and space being created in a Big Bang.